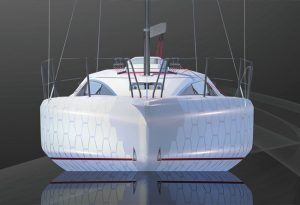 It’s been a fair old while since Dehler Yachts launched its last racer-cruiser, as opposed to the cruiser-racers that have come to define the marque. Now they’re at it again with a waterballasted, carbon-rigged 30ft (9m) offshore one-design that is already in production and due to launch soon after this issue of Seahorse hits the newsstands.

Readers with long memories will remember just how good Dehler used to be at this sort of thing. Their Sprinta Sport was a top IOR quartertonner back in the day and hot on its heels came a pair of impressively fast, well-engineered three-quarter tonners, the DB1 and the DB2, which won a world championship with Karl Dehler and Torsten Conradi – now managing director of Judel/Vrolijk – on board.

The cruising version of the DB boats, the original Dehler 34, was an extremely successful model with 1,200 built over 10 years and is now regarded as a modern classic. Read on.

come up with a title

first of the year