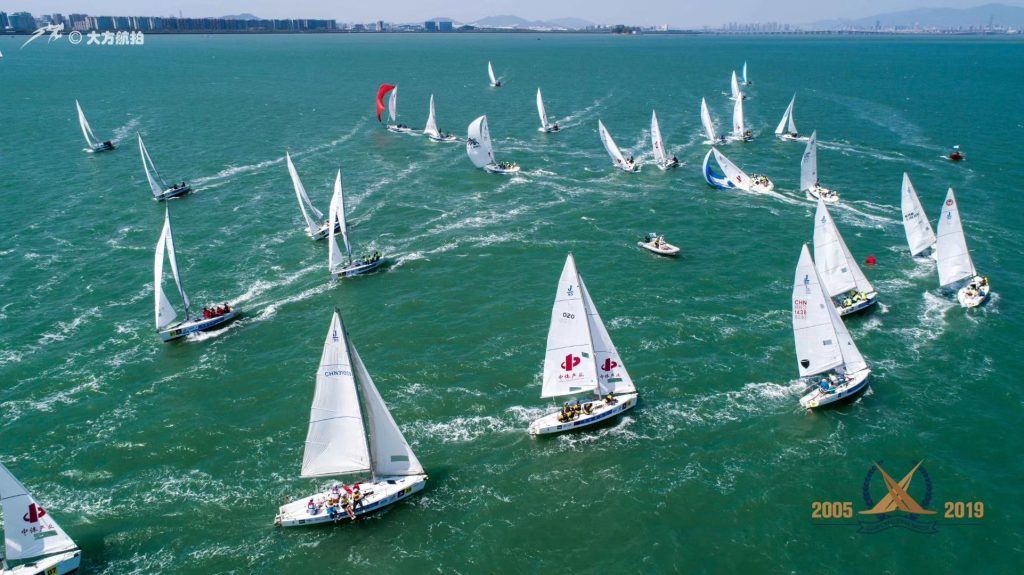 The China Club Challenge Match, founded in 2005 had its 15th iteration starting Thursday 19th September in the waters of Xiamen Island, funnily enough in China.

38 Teams came to the start line making this event, once again, the largest one design keelboat fleet in Asia

The term ‘champagne sailing’ is much overused in sailing event reports but conditions were precisely that with winds ranging from 8-15 knots throughout the day and while there was a bit of swing in the breeze it never clocked so far left or right as to make the sailing unfair. This was a little bit unusual as the tropical depression to the east of Taiwan moving towards Korea should have sucked all the air out but no-one was complaining.

Conditions were so good that the RO decided to go for the extra race beyond the standard three, a move that was to prove invaluable later in the regatta.

Racing in the main, although close, especially on the start line, was fair although, with thirty eight boats on the water, the on the water judging team of John Rountree, Wayne Boberg and Roger Purdy (all NZL) and Alistair Skinner (GBR) were kept busy, primarily with ‘early prods’ at the top mark with some teams launching their bowsprit well in advance of any gennaker hoisting activity

The one dark cloud of day 1 was a port starboard incident in race 3 that left the team from Xiamen City Career University (the innocent party) with a sizeable hole close enough to the waterline to make their boat unsafe to sail for the balance of the regatta. With the RRS not permitting redress beyond that of their first two races in a 12 race regatta there was little the judges could do to ease their situation. Having said that, their positions in those first two races was not lining them up for qualification for the later match racing.

Day two, the Friday produced more of the same along with the second general recall of the event with the, now flooding, tide swept not just a few, but close to most, of the competitors into an OCS situation, too many to identify. However, such was the patience of the Race Officer that the ‘Black’ stayed firmly in the flag roll but the rest of the regatta was firmly placed under “I” flag starts.

Day three, the Saturday, and the weather system was to the west was starting to make itself felt, not with strong winds but a light gradient breeze which later in the day was starting to be cancelled out by the opposing sea breeze meaning only two races -along with a lot of drifting around – could be got in on the water.

While the RO was waiting the boats were drifting with some well over a mile down current and hopeful of running another race it was a case of “Away All Boats” to bring them all back to the starting area.

With just a small judge’s boat we had just three on the back as we didn’t want to pull the transom out of the RIB, with 3 J-80s and crew we had about 5 tonnes and around 20m LWL behind us when we heard excited shouts from the crews behind us.

What could be exciting about being towed at 3-4 knots? 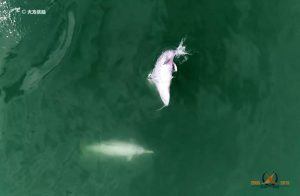 For the preceding hour, or so, we had noticed huge balls of fish boiling near the surface, now we saw the reason. In the middle distance were a small family group of Chinese White Dolphins, sometimes  known as Pink Dolphins.

To put things in perspective, estimates put their total population as about 10% of that of the iconic Giant Panda with less than 100 in the Taiwan Straits area and another 200 or so in the Pearl River Delta so to spot them at all was a rare privilege.

The fact that so much fuss is made of the Panda and so little of these beautiful creatures is indicative of how little attention is paid to our oceans.

Anyway, back to the racing and so to the final day where looking out over the water didn’t produce a lot of hope as the fleet headed slowly out towards the racing area. So it proved to be with the boats drifting further and further down the, still ebbing, tide instead of staying close to the committee boat.

The RO tried to get a race off but with less than half the fleet crossing the starting line before the 4 minute cut off it was going to have a dramatic effect on the results with a “fleet +1” staring many teams in the face. Thankfully the gradient breeze shut down completely with those boats that had actually made the start with them virtually parking up only 1/3 of the way up the first beat and with no chance to make the 1stmark time limit, 3 hoots and an ‘N’ Flag brought proceedings to a halt.

There then was an agonizing wait of almost exactly 3 hours in a baking sun as the clock ticked down towards the time limit as an agonizingly close but encouraging line of sea breeze approached the race area.

The highlight, if it could be called that, was just how effective the committee boat anchor was with close to ¾ of the fleet rafted up to it yet she stayed in position. -yes, it was that tedious.

The race within a race was would the wind arrive before the final day cut off of 1400. 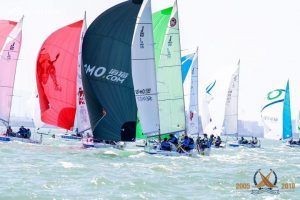 It finally kicked in at 1330 building within only around 5 minutes to 10-12, little phasing and almost directly down tide. With little time left to re-set the course there was affair amount of committee boat bias resulting in a couple of teams doing turns, one on their own and a second doing two turns because they needed ‘judge encouragement’ to do so but the usual suspects spat out the front in clear air. It proved to be worth it with one of the best races of the regatta to round things off.

However it isn’t just the racing with this regatta with 3 of the 4 evenings being organised social events with dinner with good food, wine & beer capped off with the prize-giving which once cleared leads to another nice meal with teams roaming from table to table toasting (gangbai-ing) each other.

And it needs to be remembered that this s only half-time, so to speak as this ‘fleet element’ is to select the top teams who will return in a little over a month for a match race round robin leading to semis and a final to select the challenger who will take on the defender who won the trophy last year.

From the fleet racing the three teams that emerged at the top were as follows;

There is still a lot of racing to be done before someone finally lifts the China Club Challenge Match Trophy.