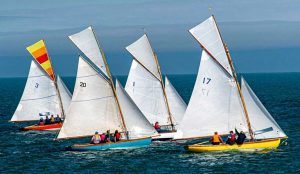 Now this is one hell of a story…

In 1828, when the recently re-named and still only semi-finished harbour of Kingstown on Dublin Bay staged its first regatta, it certainly gave an indication of the transformed place’s potential for waterborne sport. Yet it was not until 1831 that the first club – the Royal Irish YC in its earliest form – came into being. But on the south coast at Cork, the stately Water Club had been going about its manoeuvres since 1720, and was organising racing by 1765 and probably earlier while going on to become the Royal Cork YC in 1831. And on the west coast in Kerry and along the Shannon Estuary, recreational sailing was relatively well established – not least because it provided a useful cover for some profitable smuggling of low-volume high-value commodities from France, Spain and Portugal.

Be that as it may, by the 1820s regattas were being staged at what was then one of the main ports, the sheltered though tidal Shannonside creek at Kilrush on the south coast of Clare, and in 1828 Maurice “Hunting Cap” O’Connell – the uncle and effectively guardian in his youth of Daniel O’Connell of Derrynane, The Liberator – organised a Kilrush regatta which led to the formation of the Royal Western Yacht Club of Ireland.