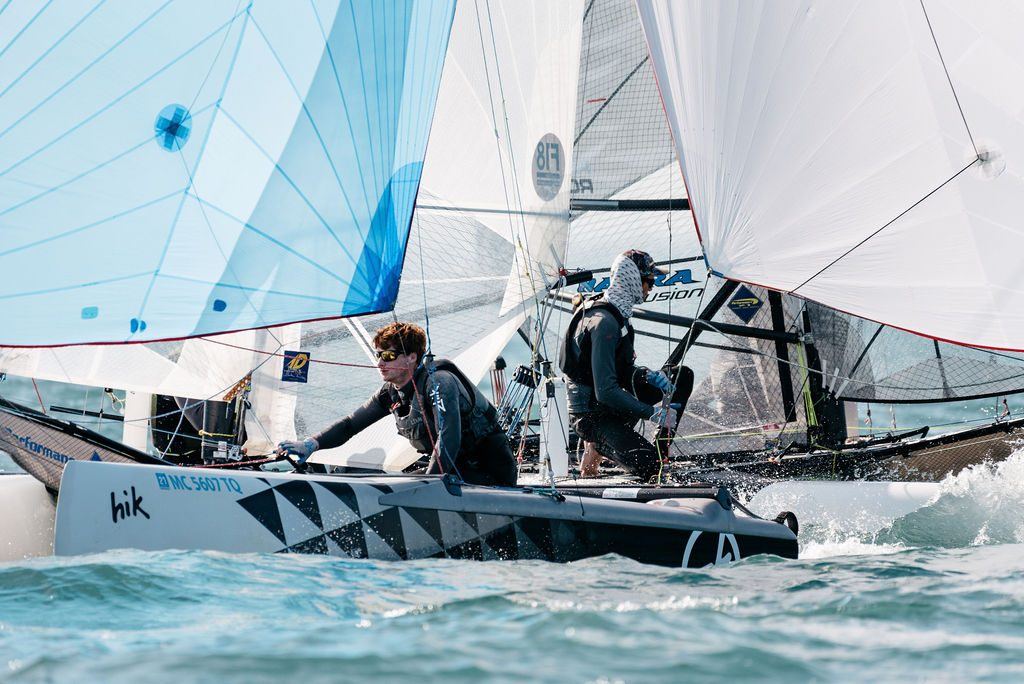 With a mere 3-point spread separating first place from second and third place from fourth, competitor energy prior to the first start of the final day of racing was intense. With winds of 9-13 knots there were going to be opportunities for the standings to change. All competitors knew they needed to be sharp to make gains. Throughout the week, conditions had not favored afternoon racing, so it would be important to move up early.

Robby Daniel/Gary Chu, overall leaders going into the last day, and Todd Riccardi/Dalton Tebo were not the only pair to watch. Maxime Loiselle/Oliver Pilon, in 3rd, had sailed in single digit standings consistently, but Ulrich Gollwitzer/Liam Walz were equally determined to end the regatta with a strong performance and close the thin gap separating the teams.

With a clean start to the first race, Riccardi/Tebo won the pin and headed left. By the windward mark Daniel/Chu, who had started mid-line and went farther right, had a thin lead. Third to the windward mark was Gollwitzer/Walz followed by Katie Flood/Eric Brattinga and Steve Stroebel/ Michael Risoer.

By the bottom gate, the leaders split with Daniel/Chu heading left, Riccardi/Tebo taking the right side of the course. Gollwitzer/Walz had set their sights on the fleet leader and also headed left. By the finish, Daniel/Chu had a firm lead and Gollwitzer/Walz had climbed to 2nd for the second time of the event. Flood/Brattinga delivered a strong performance taking 6th in the race, moving that team up in the mixed ranking as well.

One more race was held to close out the series. With the breeze between 7-9 knots, the challenge to press through the gears was on. Steve Stroebel/ Michael Risoer took the lead early, leading the first three legs of the two-lap race. Daniel/Chu worked hard to reel them, ultimately slipping in ahead before the finish with a puff from the right side of the course. With several lead changes between Loiselle and Gollwitzer in the race, Gollwitzer/Walz was able to pass at the bottom of the final leg with a jibe to the finish to grab 3rd for the race, cementing their overall standing as well. The father-daughter pair of Claus/Jessica Schnabel, achieved their best result of the series, finishing 5th making them the top mixed team of the race.

Final results can be found at https://yachtscoring.com/event_results_cumulative.cfm?eID=6144 or check out the USF18 Facebook page to see all the pictures and videos by event photographer Andrew Jowett.