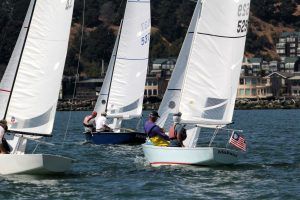 After a long delay on shore, the PRO Fred Paxton got the fleet out for the first 3 races of this 5 race series. John Ravizza with crew Chris Boome showed the same great speed that had helped John win the Huntington Regatta a month earlier. John was celebrating his birthday by leading all the way for a win in Race 1.

The race was a single sausage with wind under 10 knots and a small chop. Race 2 was two times around with the wind and seas increasing. Jim Bradley with crew Richie Burns had their best race of the series by leading around the second lap only to lose to Chris Raab and crew Kenny Dair on the finish line. Race 3 got under way late in the day with the wind still holding around 10 knots.

As the fleet reached the mid-way point on the run the wind completely shut off. Chris Raab was leading at the time but as the fleet bunched everyone who was first and became everyone who was last. Mike Burch with crew Greg Dair broke out of the pack on a small zephyr to take the lead. Mike attributed his success to his light air tell tails made from his old Barry Manilow tapes. The fleet caught a tow back to the RYC just as the sun was setting and the moon was rising. With three races on the books Mike Burch, Chris Raab and Chris Messano were virtually tied for first place.

Saturday was a complete change in conditions. Fred Paxton had the fleet on the starting line early hoping to get a race off before the wind got too strong. With winds of 18 knots and a heavy seas the fleet saw Chris Messano and crew Doug McLean take a big lead. PRO Paxton could see the conditions were not favorable for Mercury racing. There were no major breakdowns, but a couple of boats returned to the RYC. Unfortunately for Burch a broken main halyard ended his day.

The RC went looking for lighter winds and smaller seas in Keller Cove but before they could get a race off the wind started dying. Doing an excellent job of searching out the best conditions the RC moved the fleet back to South Hampton for the final race. Dave West with crew Chris Krueger, made good use of the left side of the race course and rounded the weather mark first with class President Park Densmore and crew Tony Basso close behind.

That’s the way it stayed for the second lap around this two sausage course in winds of around 12 knots and reasonable seas (at least for Richmond). West went on to win with Densmore second. The battle for the Championship was being fought by Messano and Raab in third and fourth place. To win Messano needed to put a boat between them which he almost did but in the end it was Chris Raab and Kenny Dair taking their 7th championship victory.

Wining the Jack and Jill Trophy, first male and female team, was Regatta Chairman Lyn Hines and wife Odile. In the Silver fleet, newer members to the class, it was Chris Davis who was fresh off a strong showing in the Millimeters Championship a week earlier and his crew Bob Shore.

The fleet enjoyed racing with new members Charles McKenzie and newer member Tony Chargin. It was also good to have Walter Smith and crew Peter Baldwin back in the class after taking time off to race Walter’s Cal 40.

The Class would like to thank Richmond Yacht Club for an excellent regatta both on and off the water. And give special thanks to the entire race committee for doing a fantastic job it the most difficult of conditions.

Summing up, the racing included everything from heavy winds and choppy seas to very light winds on smooth water. There were 5 different winners for 5 races and the Championship went down to the last 100 feet to the finish line in the final race. That is great Mercury racing. Photos here.