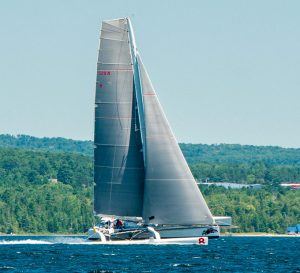 They were on target.

But an hour into sail, just north of the Wisconsin state line and 15 miles offshore, the crew was startled by an enormous noise from the rudder. They quickly slowed the boat to six knots by heading downwind.

“Donny and Matt stabilized the boat and I went below to check the water and was able to stop the major flow,” said Warner.

“At that point, we contacted the Waukegan Coast Guard who sent out a rescue vessel. They were on station within two hours. By the time they arrived, the water was up to my knees in the main hull. Petty Officer Cary brought a water pump on board which allowed us to reduce water in the main hull to a manageable level.”

After a consultation with the US Coast Guard, the crew determined the safest course of action was to sail downwind to St. Joseph, Mich. with assistance from the St. Joseph coast guard.

“The coast guard crew was fantastic,” said Warner. “They deserve big kudos. Even though we were in control of the situation prior to their arrival, the help they rendered by supplying a pump and Oeakum to stop the leaks and escort to shore provided an additional factor of safety for the crew and the boat. By the time we reached St. Joseph harbor, Donny managed to partially reinstall the rudder and rig up manual controls for the helm.”

“The boat is in good shape and safely at dock. We plan to sail her under her own power to winter storage, where improvements will take place to be ready to go at it again next spring. We aren’t sure yet how the rudder failed and we may never know. Arete is made for these conditions and was sailing well within her performance window. Hopefully, the third time will be the charm. Although the crew is disappointed, Arete is ready to fight again!”

Last fall [Sept. 21], Arete was heading toward the Manitou Islands its first WSSRC attempt. Warner tried to go west of the islands, but the winds started to clock around and build ahead of projections. This forced them to head easterly.

For two hours, they battled 40-50 knot northwest gusts, 20-foot seas with 60-foot wave lengths which prevented Arete from getting to the top and making the turn down the Straits of Mackinac. On schedule to break the record with roughly 90 minutes before Mackinac Island, they had to retire and seek safe safety into Harbor Springs, Mich., where Andrew Wells and the Carruthers family provided safe shelter at the Gosling’s boat house.

The WSSRC tracks 75 racecourses around the world. The Chicago to Mackinac record was set by Steve Fossett in 1998 at just under 19 hours. Recently, Peter Thortan’s team achieved just under 18 hours with an average speed just under 17 knots. Arete is attempting to make a run at above 25 knots and between 11-14 hours to elevate the ranking of the great Chicago to Mac race’s standing to the top ten in the world from 33rd.

“Arete is sponsored by The Coral Project which is dedicated to restoring coral around the world. Like the WSSRC record attempt, coral is facing its own race against time. The Coral Project and its partners have their own bold goal to replant over one million corals a year.”

If you want more information, go to AreteTrimaran.com and The Coral Project.com. – Seth Schwartz.