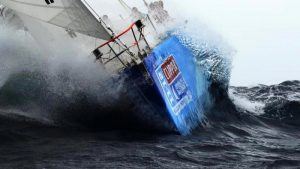 The Clipper Round the World Race started this past Sunday. The fleet of 11 boats left from St Catherine’s Dock in central London, passed under Tower Bridge and motored down the Thames River to the start line off Southend-on-Sea at the mouth of the Thames.

The fleet is bound for Portimão, Portugal some 1,200 miles away. This is the twelfth running of this iconic race and I, for one, am a huge fan. There is no other sailing event of this scale where complete amateurs can participate. In fact in the race promotional materials they make it clear that “no previous sailing experience is necessary.” Anyone who can come up with the money can participate but the nice thing is you don’t have to do the entire race. You can pick the legs you want to do and pay per leg.

If you want to go the whole way it will set you back around $55,000 but you will get an experience of a lifetime and allow you a certain swagger at the yacht club bar.

The race was created by Sir Robin Knox-Johnston, the first person to sail solo non-stop around the world, and has grown in strength since the first race back in 1996. There are now 11 identical 70-foot yachts participating and there will be an estimated 700 crew taking part, both male and female with the youngest at 18 and the oldest at 76.

All crew members are given a full months worth of training and a free set of foul weather gear which they will no doubt need along the 40,000 nautical mile course.  The race is divided into eight legs and between 13 and 16 individual races and is raced on a point system. Each leg will be scored on a first home basis, with eleven points awarded to the first yacht across the line, ten points to the second, and so on, with the final yacht being awarded one point. Scoring Gates will be used on some individual races and the first three boats through each scoring gate will be awarded three, two, and one scoring points respectively.

The reason that I am a fan of this race is because we need more adventure in our lives. All of us. We have become too complacent, too sedentary and too willing to live vicariously through others. I was lucky enough, or probably more like it stupid enough to get to circumnavigate back in my early 20’s. They said back then that  all you needed was an IQ less than the length of the boat if you wanted to sail around the world.

I qualified just fine and had an incredible, life-changing adventure. I never went to college but felt that all the sailing I did in my 20’s and 30’s was all the education that I needed in life. I was probably wrong but heck it was a lot of fun and I have no regrets. I can belly up to the bar knowing full well that the world is indeed round. I checked it out; a number of times.

Most of the Clipper boat are sponsored by a city where the race will visit and it’s a good model for financing an event like this. I was told by the team who have taken over the Volvo Ocean Race that having the name “Volvo” in the title turned off many potential team sponsors. They did not want their money going toward promoting some other company, in this case Volvo.

Having a local boat in the race also ensures good media coverage in that country, and a good turnout at each stopover. Each boat has a professional skipper and first mate to guide and help the rest of the crew and for those who lament how amateur sailors should not be allowed to participate let me point out that by the time these “amateur” sailors get to Cape Town they will have covered more offshore miles than most sailors do in a lifetime.

I think that one of the reasons we are seeing so much interest in retro races like the Golden Globe Race and the Ocean Globe Race which will take place on the 50th anniversary of the first Whitbread Round the World Race, is that people really are craving adventure and for relatively little money they can sign up for one of these races and lap the planet – via Cape Horn which is something the Clipper Race does not offer.

They go through the Panama Canal. The slogan for the Ocean Globe Race is “Turning the tide for ordinary sailors with a dream.” I think it’s totally on point. – Brian Hancock.

they had a hobie day. two of them, in fact.

when he grows up…