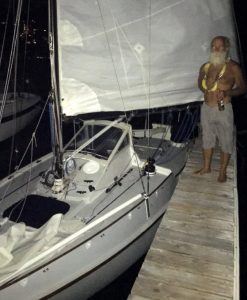 At 10PM last night single hander Keith Leitzky sailed back into Kaneohe Yacht Club on Oahu, where he had departed two months earlier on his modified Cal 20 “Magic”. (yes, it really is a Cal 20! -He modified it extensively.  Moved the chainplates outboard, modified the deck a bit, removed the jumper struts from the rig, removed the windows, installed a micky-mouse dodger…  but the base hull, keel, and rudder are vintage Cal 20. –  ed.)

He sailed to as far as 55 degrees north latitude on his 6,000 mile sojourn through the North Pacific, never coming closer than 150 miles to land. Keith described it as “a shakedown cruise” for an upcoming attempt at Cape Horn, which he noted is no further south than he went north.

He got whacked by three big low pressure systems while up in the Gulf of Alaska, but he “just put up the storm jib and went below” to ride them out. Keith had backup systems for nearly everything, but nothing broke. He did note that the gap between the second reef in his mainsail and the storm trysail was too great, so he will have a third reef put into the main.

Otherwise, all he plans to do is “buy a bag of oranges at the store” before casting off for the iconic Cape in a couple of weeks. Stay tuned…. – Anarchist Noodle.