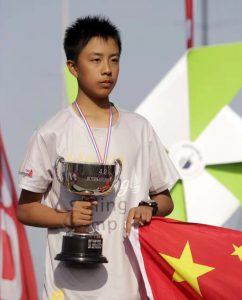 I received a rather nice SMS from a sailing friend the other day “Shanghai (name changed to protect the guilty) you are the one behind all this, without SBYC, we would not have had all these young sailors.”

So what was he referring to?

In 2001 I founded Shanghai Boat & Yacht Club (SBYC). This was the first member’s run sailing club in China. It later moved to Shanghai Yacht Club &Resort (SYC) and merged with that organisation. A young man called Scot took up sailing with SBYC and became rather more than just an average Laser sailor and has since sailed on the US Collegiate sailing scene and is now likely to break into the Danish National Sailing Squad.

One of the Chinese kids he coached at SYC, Liao Yu Shuo, became Topper 4.2 World Champion a few weeks back.

AS far as I am concerned all I did was  start a sailing club with one of its aims to help develop our sport of sailing here in China. YuShuo is the kid that decided to try sailing and had the aptitude for it and the attitude to listen to his coaches and then practice what he had been taught, and practice a lot.

It paid off, as his world champion achievement has just proven.

This, in spite of the claims by many to be “the future of sailing in China” is the real future of sailing, not just in China, but everywhere. If any sport, and not just sailing, cannot attract and appeal to the young it is, if you pardon the pun, dead in the water. And by young I mean all the way through to adulthood as our sport loses far too many good and keen sailors as they approach their late teens

To me this achievement is as meaningful as an Olympic Gold Medal, no government ‘medal mill’, no elite national sailing squad (most countries have them) but funded, supported and encouraged by his parents (who are not sailors themselves in YuShuo’s case) in exactly the same way it would be in pretty much every other country in the world.

With all due respect to the Olympic Class sailors who are given every facility and assistance possible , this says more to me about the long term future of our sport.

We need to remember that the Olympics involve only a very few classes of boat amongst the hundreds available for sailors, no Sunfish, no Topper, no Moth or Waspz, no fully crewed keelboats, no….well you get the picture. Perhaps World Sailing needs to remember that also.

The future of Chinese sailing is NOT high speed flying boats but ordinary kids like Liao Yu Shuo, trying it, getting good at it and enjoying it.

It was nice for that friend to tell me I was “the one behind all this” but in reality and as I have already said, all I did was to start a sailing club so I could sail, the real credit goes to the others more directly involved and of course to Liao Yu Shuo himself for becoming a World Champion.

As sailing develops here in China, the one thing I think I can say with certainty is he wont be the last. – SS.