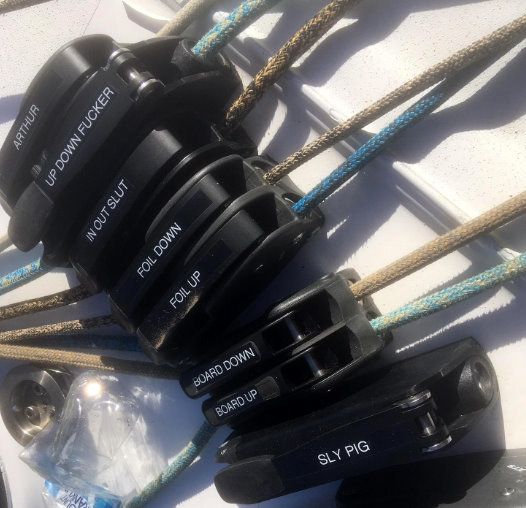 We sailors delight in the special language of boats. The vocabulary of the sea is a rich store of unique words and phrases to which we keep adding as sailing itself changes.

The photo to the left shows the array of jammers on a current ORMA 60. “Foil Up” and “Foil Down” are self-explanatory, but what do the “Up Down F—-r” and “In Out Slut” control? And who are “Arthur” and “Sly Pig”? You would have to sail the boat for a while to become familiar with the particular language developed by her crew.

The correct term for these private collections of words and phrases that are the preserve of a distinct group is “cant”. To be precise, they are defined as being “jargonistic” and “ephemerally fashionable”. But “cant” also means to “slope, slant or tilt”, which is how we get “canting keel” (which, by piquant coincidence, might also be described as “ephemerally fashionable”).

This casual slang language of sailing – its cant – often accrued other meanings through long usage. Thus, in older contexts, “cant” could also mean “to whine or beg”, and is related to “cantankerous” (quarrelsome, perverse, bad tempered). When your keel refuses to cant, you might become cantankerous.

Things get a tad more complicated when sailors and yacht designers attempt to assign the correct term to a new development in the physical form of boats.

Just a page or two back from “cant” in our dictionaries we find “canard”. In general speech and writing this usually means “a false report or hoax”, but to sailors the word is applied to signify any control surface that protrudes from the underside of the hull, other than the keel or rudder. The Oxford English Dictionary neatly defines that sense as “an extra surface attached to an aircraft, hydrofoil, etc., for stability or control”.

Dagger boards can therefore be called “canards”, although when they articulate they might more accurately become “forward rudders”. Dynamic Stability System (DSS) foils – those broad planks that slid laterally through the hull (until they became unfashionable) – were also canards, albeit horizontal. They might also have been termed “hydrofoils”, but possibly that sounded too antiquated.

This search for the right marine word seems never ending. The dockside chat in Sydney this week is that the modifications currently underway for the 100-foot supermaxis Black Jack and Wild Oats XI will include the ‘back to the future’ retrofit addition of a front rudder. This is presumably to counteract the extra leeway these huge boats suffer because their fin keels are now so slender.

But indications are that these extra foils will not only turn in sympathy with the aft rudder, but also retract up through the hull when sailing downhill. So should they be called “canards”, “dagger boards” or “forward rudders”? No doubt that debate will enliven many a waterfront drinking session over the next few months.

Meanwhile, it might be safer just to name them after their real job – “kelp cutters”.