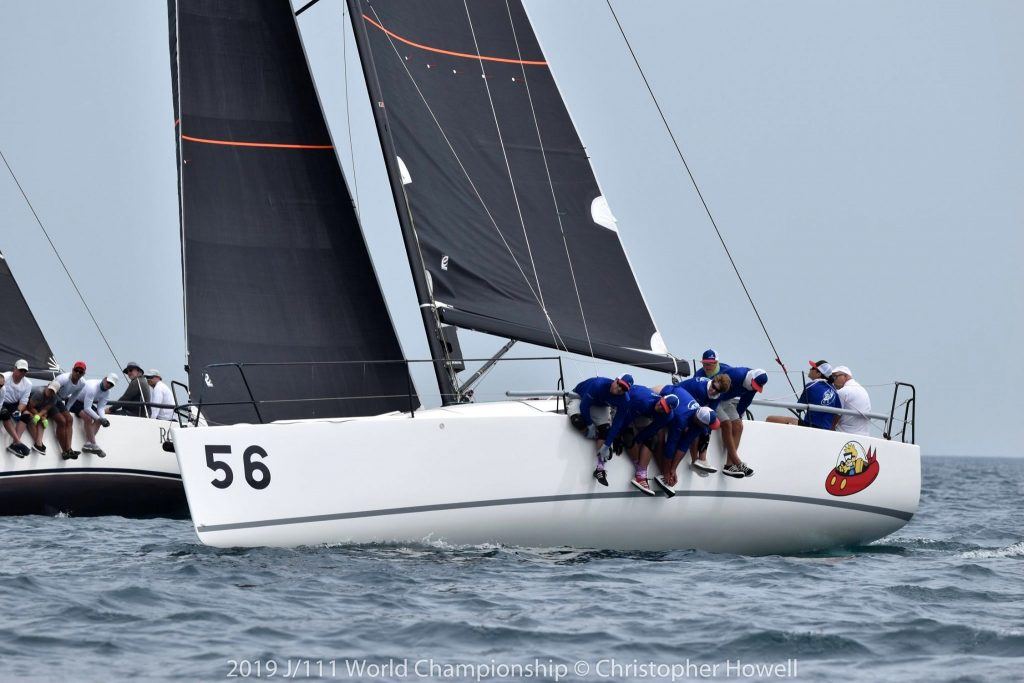 Despite double bullets, Spaceman Spiff, pictured above with their nice looking Evolution Sails (cheap advertiser plug), is in second after day one of the J-111 Worlds.

Following storms that rolled through Chicago on Tuesday, twenty-three  J/111s had to wait a bit longer on Wednesday to launch the 2019 J/111 World Championship, hosted by Chicago Yacht Club.

Race one was abandoned due to lack of breeze and a severe shift from 230
backing to 185 degrees. However, the forecasted frontal induced breezes from the westerly  quadrant finally kicked in by noontime. The winds started in the 240  deg range and ultimately shifted to 280 deg by last leg of the last
race, with winds eventually?? increasing into to 12-17 kts range.  As a result, the Chicago YC PRO managed to run two double windward-leewards with 1.2nm legs and a final five-leg last race with
1.4nm legs.

Despite a pair of bullets by Rob Ruhlman’s SPACEMAN SPIFF, it’s Andrew and Sedgwick Ward’s BRCO that ended the day at the front of the pack.  The BRAVO crew from Shelter Island, NY only placed in the top three  once, but their scoreline of 7-3-5 for 15 points puts them one ahead of SPACEMAN SPIFF that counted a 14th for 16 pts total. Peter Wagner’s SKELETON KEY into third place with tallies of 6-8-4 for 18 points.

Ruhlman’s SPACEMAN SPIFF earned the first victory of the Championship in  the day’s opening, and lightest, affair. Jeffrey Davis’ SHAMROCK and Richard Witzel’s ROWDY followed in second and third, respectively. Swiss sailor Jorg Sigg’s LALLEKONIGG hit the right corner hard in the first windward leg of the second race, leading the fleet around the track and never getting challenged by other boats.

love affair Some Sailor Chicks of the Week are Olympic medallists or World Champions, and some just remind us why we have such a love affair with sailing.