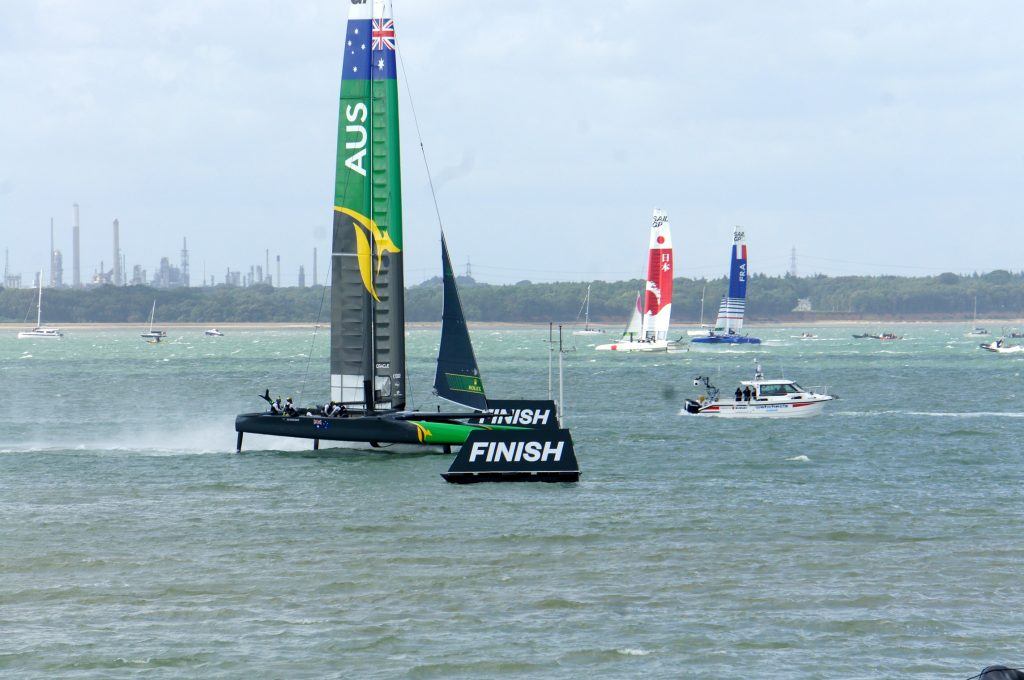 So, as some of us already know there was no SailGP action on Saturday but, for the avoidance of doubt the Royal Yacht Squadron was flying N over A for the Cowes Week yachts , the Redjet Southampton -Cowes ferry was suspended for 4 hours and The Needles was recording 65 knot gusts and at the Classis Car show at the Island’s airport they were chasing the frames for the car stands down the airfield and as I crossed the Solent on the Red Funnel car ferry the captain cheerfully reported constant winds of 35 – 41 knots.

Sunday dawned with a little less breeze yet still on the edge of the upper limit for the F50 flying machines and my day started off with a visit to the Tech Area, Team China to be specific.

If anyone doubts the strength of these boat’s foils, new part had been fitted to the hydraulic system and when the system was switched on the foil dropped onto an Aluminium support bending it like paper and while causing some surface damage to the foil. Within 40 minutes the shore crew had applied fast set epoxy, cured it, sanded and polished it, then lowered the boat onto her trolley ready for launching. All done quietly, efficiently with no sign of a headless chicken anywhere.

The sailing action commenced with the RS Cat 14 fleet of youngsters drawn from local clubs as part of the SailGP Inspire initiative before making way for the main event.  It was noticeable none of the F50 teams were risking any showboating prior to the racing, these beasts were going to be a handful even for crews at this level.

And so it proved to be earlier than I think anyone expected. Rounding the first turning mark in the first race France, China and the USA stuffed it in as the boats turned downwind and the power came on.

France and China got away with it but whether USA were a little slower in dumping power of the little bit of wave they hit was that bit steeper was unclear but she hung there for what seemed an eternity. Will they, wont they transpired to be ‘they will’ as almost in slow motion the wingtip headed for the Western Solent with thankfully little more damage than to the beam fairing and of course pride although later on Rome Kirby played down the incident as just racing.

They were thankfully able to re-join the racing for the subsequent races. Not so Team GBR as a huge down the mine incident with the boat stopped dead resulted in the worst kind of damage, that to the crew with one of them performing a somersault that would have scored high in Olympic competition. The injuries were nowhere as severe as they might have been. A huge disappointment however for what had shown itself to a partisan crowd lining Cowes Green and Egypt Point.

I don’t intend to produce a blow by blow account of the racing but the atmosphere build up was well done except that instead of a mascot running along the beach getting people to cheer it was a helicopter side-slipping along the crowd, there was a genuine buzz with people out with their chairs on the beach, flags waving, a real sports event atmosphere and excitement and no remote prizegiving with the teams brought ashore while their support RIBs kept the boats on station in the background.

The series has had its detractors, and after being live at an event I have to say unfairly so. Their media department clearly doesn’t like Sailing Anarchy and there are anarchists who have reciprocal feelings but this series, indeed any event that raises sailing’s profile can only be good for our sport.

The Marseille final towards the end of September is the season finale with a grand prize of USD1m. Perhaps a foregone conclusion who will be in the final with two clear series leaders and the third place GBR slipping back having completed no races in Cowes and Japan having a less than sparkling day on the water but in the winner takes all match race it could all turn round as Japan has proven in a previous venue.

Am I biased? Perhaps a little but I was sitting beside a traditional sailor for the action. A Corby 25 owner who wont see retirement age again and he thought this was a wonderful thing for sailing and good to see our sport being promoted in such an exciting and dynamic way. Attendance? Hard to say except any official sales of seating or VIP visitors could easily be doubled by the numbers watching on the pebble beach in front of the grandstand.  6 weeks to the finale! – SS.

“Waaa, I can’t get crew for my SuperYacht”