no coke for you 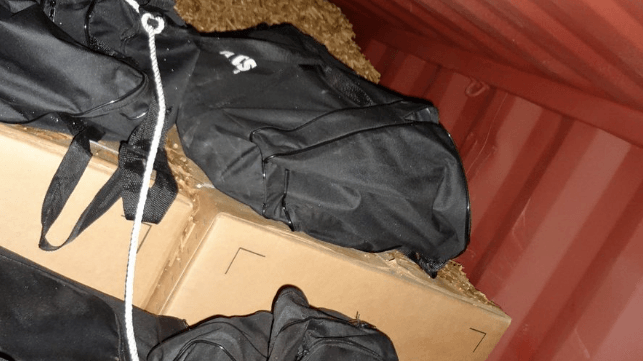 Hot on the heels of a 4.5 tonne cocaine seizure in early August,  customs officials in Hamburg have nabbed 1.5 tonnes of cocaine in a container arriving from Brazil. The new catches in Germany are in addition to a 15 tonne bust of a Europe-bound cocaine shipment at the Port of Philadelphia.

“During the search of a container ship, officials from the main customs office in Hamburg were able to secure another large amount of cocaine last week,” customs spokesman Oliver Bachmann said. “The container with tobacco boxes was loaded in Rio Grande, Brazil and were bound for Antwerp. The level of cleanliness is again very high, so we would estimate a street sale value of about 350 million [euros].”

Bachmann said that risk analysis helped customs officials pick the right containers to inspect, leading them to find 64 gym bags with 1,575 packets of compressed cocaine in an otherwise innocuous shipment.

Last month’s giant cocaine seizure at Hamburg set a new all-time record for Germany. Its EU street value was estimated at roughly $1.1 billion – more than 100 times more than what it would cost wholesale in Colombia. That shipment departed from Uruguay, which is believed to be a new hub for the global drug trade.

Cocaine use is relatively high in Western Europe, particularly in large cities, where it can fetch roughly $60 per gram on the street (after cutting with dilutants). Research based on traces of the drug found in sewage indicates that usage rates could be in the range of nearly one gram per day per 1,000 people in well-to-do metropolitan areas like Amsterdam and Zurich. The costly drug is less common in Eastern Europe.