There is a persistent rumor on social media that the ILCA Dinghy is dead. 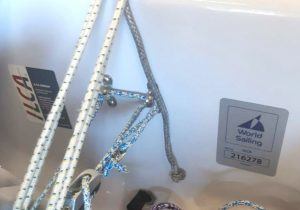 The ILCA Dinghy was strongly present at the World Sailing meeting last May, as the MNAs overruled the vote of the equipment committee in favor of the RS Aero, and they endorsed instead, with a strong majority, the Laser AND the ILCA Dinghy – whatever name one chooses – as single-handed dinghy for the 2024 Olympics, as long as the Laser class was going to put its house in order and get the various builders sign anti-trust FRAND and other documents.

ILCA dinghies also made a remarkable appearance in Kingston, Ontario, as charters for the ILCA Youth Worlds (see picture). The ILCA stickers were soon removed from the boats, once pictures appeared on Instagram. The importation in Canada of these ILCAs / Lasers by Performance Sailcraft Australia and the international Laser class ILCA was heavily criticized by the head of LaserPerformance, who mentioned in a recent interview with Tom Ehman from Sailing Illustrated that this was a trademark infringement and that he would get them seized if they are not out of Canada after the Worlds. Read on.