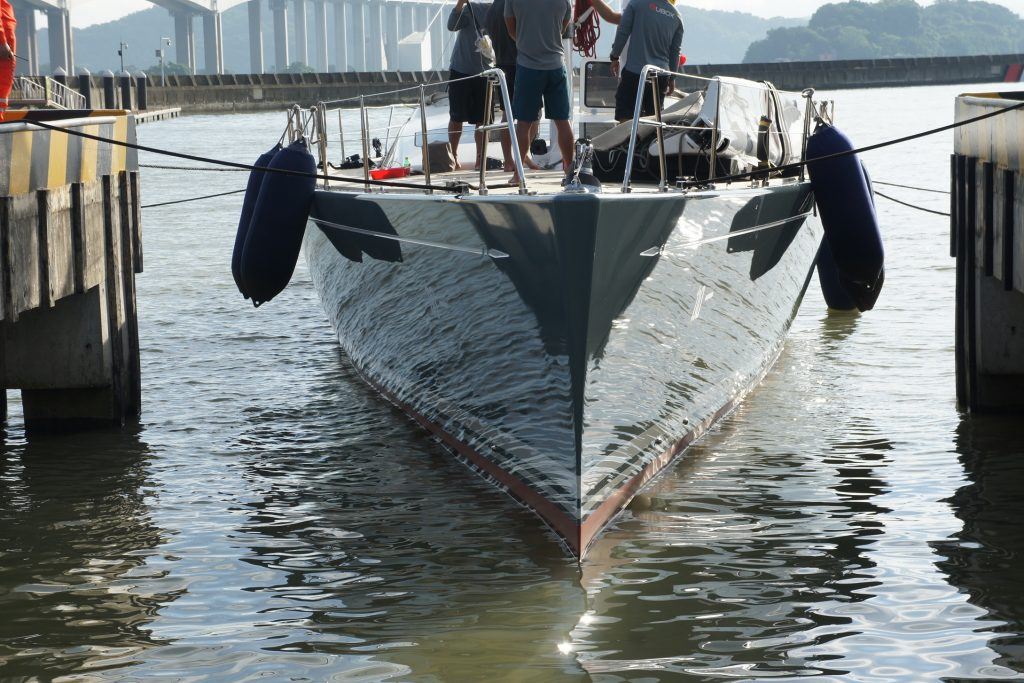 It’s been a long journey. The Swan 82 UBOX needed a bit of a refit but why do a bit when you can go the whole hog!

She was lifted at the yard almost a year ago. First problem was the yard didn’t have any refit liability cover and it took them 3 months to obtain the cover. At first they thought covering their work was enough, not the full value of the boat – that took a while to sink in.

Glad to say that although the management of the yard was a bit flaky, the actual craftsmen and women have been superb. New teak decks – strip off the old, the new laid as planks the original way and not just routed sheets have given her a new beautiful deck (the caulking alone took 2 weeks to cure). Underbody completely faired and re-antifouled. In between the topsides were flatted back and a total of 6 coats applied, filler, 2 coats high build primer and 3 topcoats – she now has a mirror finish the equal of what Nautor would have sent out of the yard with when she was born.

The last step was the stepping of the refurbished mast and that wasn’t just a quick repaint. Her PBO standing rigging was near the end of its life so we went with EC6 Carbon.The spreaders had to go off to Europe for new ends to suit the new rigging and as it returned to China the customs were, shall we say, more than careful AND slow taking 3 weeks to clear. Check out the time lapse video of the rig going up!

Additional challenges were that we were around neaps and it was calculated we would only have around 30cms under her keel if we weren’t careful and of course the weight of a 36m and 1,200kg mast would reduce that margin further.

Fortunately we had a team fly in from Nautor Swan, Palma and full credit to Oscar Ibanez, Andreu Videiella, Bernat Vidiella and Pancho Pi-Suner, while it is impossible to make such an operation look easy it was blatantly clear this was far from the first time they performed such an operation although I am sure they usually didn’t have the double threat of tide and weather as additional challenges – yes, I forgot to mention there was a typhoon heading our way as well. It would be unfair to omit the boat’s own crew of Zak, Brian, Panda and Logan who positioned the boat, made sure she didn’t move and generally were at the beck and call of the Swan experts.

It was fascinating to see how calmly they were able to take a 36m horizontal tube with all the bits on and turn it into a 36m vertical tube.

And trust there are plenty bits and the mast took over a day to dress properly and we had all the internal wiring replaced while we were at it and there was plenty of that. From the top: VHF, lights, B&G Wind Instrument, Satellite Comms, RADAR, Steaming light, Deck Light, Under Spreader lights, Under boom lights, AIS, 4 x20-20 B&G Displays and probably some I have forgotten. Then of course the hydraulics for the boom vang and main outhaul. All this had to beefed through the partners in the deck before the main could be lowered down onto its mast-step.

All in the less than 2 hour window we had calculated before the keel potentially touched mud. THAT would have been game over.

Then there was a full day of connecting and testing all the systems.

Sometimes when you are planning these sorts of evolutions you wonder if it is all worth it, the time, the stress and of course the cost but when you see the finished article you know it is. The challenges are forgotten or at least put aside, well put aside until the next one and it is nice to know that there are specialists around like the guys from Swan Palma, even if you have to fly them half way round the world to help.

Now if only that damn typhoon would bugger off and let us get on with things!

on the chopping block