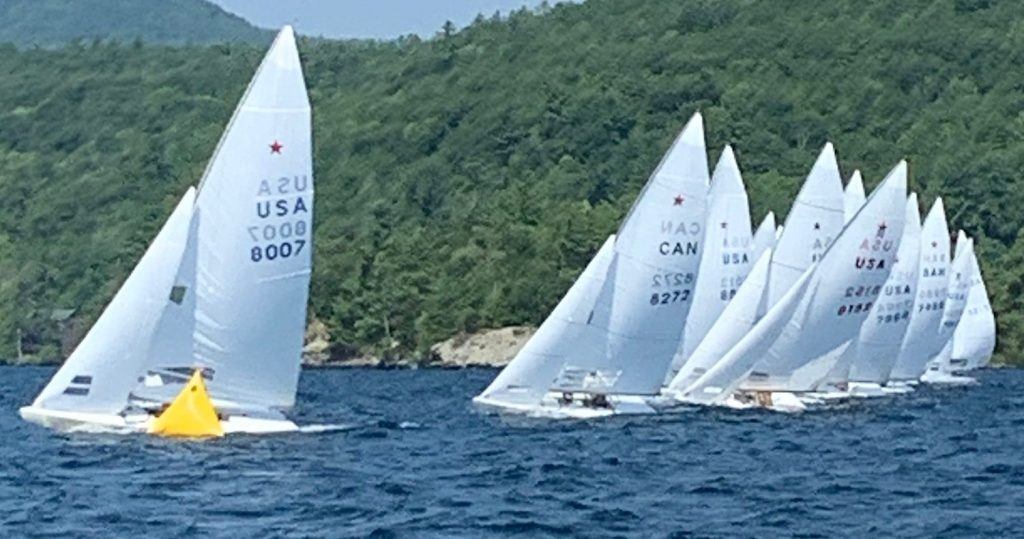 The breeze filled in from directly down the lake (that would be south!) earlier than expected, and the Race Committee started on time for the first race of the day. Gold Star winner John MacCausland with Rick Burgess on the strings won the race by being the first to the favored right hand corner in Hague Bay, fending off the 18 strong fleet the rest of the way.

Race two started in the same 6-7 knot southerly, with Ben Sternberg with Will Christianson crewing taking the second race win, again after touring the local harbor on the right. The wind went about 10 degrees right, and the Committee moved things around accordingly for the third and last race of the day, won by Mark Passmore with Luke Morton in the front of the boat.

Sunday was more of Lake George’s finest, with about 10+ knots of breeze from exactly the same direction and a glorious, cloudless sky. Bob and Jon Krahulik decided to try the other side of the lake on the first beat with one other boat, and easily crossed the fleet at the weather mark to take race 4. The fleet took notice, and there were no more Star boats in Hague Bay for race 5, and Ben and Will took the cannon (old school!) for the win.

The regatta was a special event in that the Host Club put on a party for the sailors on Saturday night with multiple generations of members hosting and bringing spectacular pot-luck dishes to share, hors d’oeuvres passed to the guests by offspring of the volunteer members, three generations of at least one family sailing, two generations of women skippers, vying for family honors on the podium. A family oriented event indeed that brought a smile to all.

At the end of the regatta, Johnny Mac and Rick were awarded the top place in the Open, Mark Passmore and Luke awarded the Blue Star as District Champion, and hometown hero and Vice Commodore of the host Club Tracey Barth with other half John Barth crewing wins the Green Star. The club looks forward to another great event next year! Photo courtesy of Amy Stapleton.