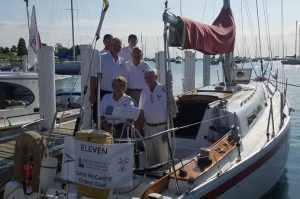 Anxious to get begin the 111th Mac race, Gene McCarthy steered his Erickson 35 away from the Chicago Yacht Club dock and headed for the starting line in front of Navy Pier, Saturday morning, July 13.

At age 90, now with 65 Macs on his resume, you could see the boyish-twinkle in McCarthy’s eye, as he made final preparations for his crew of six. The world’s longest freshwater race of 333-miles draws sailors from around the Midwest, parts across the United States and a handful from abroad. For McCarthy, there’s a family theme as his son, Glenn, 59, with 43 Macs, as a watch captain. Daughter Gail, has 44, the most of any woman.

“It was a typical Mac,” said McCarthy, who can tie John Nedeau’s record of 66 next year. “There was light and heavy winds, two squalls and enough wind to get us to the [Mackinac] Island.”

McCarthy’s first Mac was in 1953 when he was a substituted for a crew member who had to cancel. Two years later, he was involved in the longest Mac. “It was two days with no wind,” he said. “We started Saturday at 1:15 p.m. and got to Mackinac Island at 2:18 p.m. Thursday. We got third in our section.

1970 was the most memorable race with 75-mph winds for eight hours. “That was the zenith of all weather,” said McCarthy. “89 boats made it to the island and everyone was damaged; 88 boats dropped out. We reefed the mizzon sail and used a storm jib. It started at the Manitou and ended at Gray’s Reef. The storm came at night, the waves were 10-fifteen feet.”

Ted Turner had came in for the race bringing his 12-meter American Eagle. When asked about Lake Michigan sailing, he replied, “I hereby publicly retract anything and everything I have ever said about inland sailing.”

Saturday afternoon, they moved steady with southeast winds at seven-eight miles an hour through the evening. Light air through Sunday was trying for the 13-boat section. “The wind came up to three-four knots; we had to work very hard to keep the boat moving,” said McCarthy. “Sunday night there was a squall and heavy rain, but that washed all the dead flies off the deck. They got a free ride on the boats without a ticket. If people had shorts on, their legs were eaten alive.

“A squall moved in around 9-10 p.m. We adjusted the jib and the wind stabilized from the northeast taking us through the Manitou Islands. Sunday evening the winds were very light.” Approaching Gray’s Reef before sundown Monday night, a 40-knot squall moved behind them. “We put on No. 4 [smallest jib sail], but the wind didn’t get too heavy,” said McCarthy.”

Glenn McCarthy understands the importance of experience. “It’s like a hospital,” said Glenn. “When we switch watches, you transfer everything that’s happened on the boat; what ropes were moved. Dad has done lots of racing and has a wide range of friends because of it. Sailing is an experience sport. You gain knowledge from each time you went out whether there was no wind or 60 miles an hour.”

“Dad hasn’t changed a bit,” said Glenn. “There’s a lot of planning and preparation that goes into the race before you get to the starting line.

“He can read the clouds, water, charts and understands the fastest way to get from point A to point B is not always a straight line. He has a strategy from beginning to end.” Adjusting for the continuous weather changes from Gray’s Reef to the finish line takes a sixth sense or as Glenn stated, “Sometimes, it’s just luck.”

A critical point in the race came when Gene adjusted his course and headed east at Gray’s Reef. Their main competitor, Providence [another Erickson 35], was ten miles ahead at this point, went left with the rest of the fleet.

“There were a lot of sail changes, we used a spinnaker the whole time down the Straits,” said Glenn. With three miles left, they were over a mile behind Providence. “We finished the race and tied the boat up at the dock. We hear the boats calling in,” said Glenn. “We [all] thought Providence was ahead of us. I hear them call in and I just pissed myself.”

Eleven came in second place with a corrected time of 45:43:27, seven minutes behind Odyssey which took first.  Providence was 17 minutes behind. Adding the internet to the boat was a major addition. “The internet allows us to see the storms coming in and makes us better prepared,” said Glenn. “But we’re still seat-of-the-pants sailors.”

Gail knows Gene is indispensable. “Dad knows when to make the right moves,” said Gail. “His knowledge of the lake, currents and weather patterns is uncanny.”