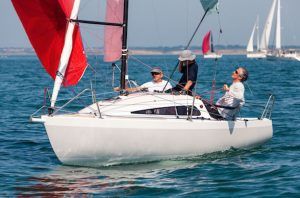 As regular visitors to the forums know too well I am always up to corrected if wrong.

We seem to have got it slightly wrong with the image of the Gold Roman Bowl winner. Eeyore is not a standard boat at all.

In my defense the “OFFICIAL RESULTS PAGE” for the 2019 Round the Island Race lists Eeyore as -and I quote – “Alactiry 18 Bilge Keel”. It just goes to show that you shouldn’t believe everything you read, even when it is on the official results page, perhaps the word ‘modified’ might have been appropriate ☺.

I searched the photos on the Round the Island Website and couldn’t find a photo of an “Alacrity 18 Bilge Keel”, at least not one that looked like those that were around when I was new to sailing in the ‘60’s so I posted a photo of what IS an Alacrity. Definitely a case of apples and oranges.

The yacht that won the Round the Island Race 2019 (Eeyore) is, one could say, slightly modified (if she started life as a 1960’s Alacrity at all) as Simon of Suffolk Sails so rightly points out. She still rated the same as a boat 8 feet longer and I reckon still probably cost less than Jethou’s mainsail. She was also – obviously – better sailed to her numbers than any of the other finishers proving that sometimes 0.771 (Eeyore)is a bigger number than 1.647 (Jethou).

Humble Pie on order, just waiting for the custard to come to the boil.

One last comment. One respondent described the boat in the image as a “piece of shit” (not Simon). Pieces of shit like that built by George Hurley, or Newbridge Boats and other small builders probably introduced more people to sailing than any of the modern plastic fantastics. My own “piece of shit” many years ago was an aged Corribee – same colour as Ellen McArthur’s “piece of shit” and she was my first ‘boat with a lid’. The Corribee at just 21 feet long is credited with at least 6 Atlantic crossings (not bad for a piece of shit) decades before the minis stole the limelight, and many of them are still going strong. And guess what? My ‘piece of shit’ also won races when sailed well.

We need to remember that no matter how good we are at whatever we do we were all beginners once. (Wonder what kind of boat that respondent owns?) – SS.

Title thanks to Humble Pie

the time is now