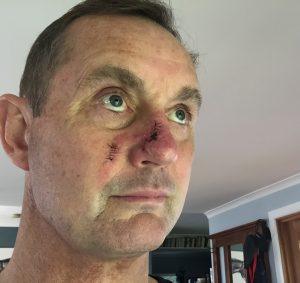 I will never forget the first time I was told that I had skin cancer. I was walking through a shopping mall and my dermatologist called me on my phone. He was very good, and said it didn’t look serious and that I should come in to see him for more tests – but I wasn’t listening by then, I was frozen to the spot thinking, ‘why me?’

Well, why not me? Let’s look at the facts. Born in the 1960’s on the clear-skied Channel Island of Jersey, I grew up on a beach, surfed every weekend plus after school, (and occasionally during school…) and from twelve years old sailed on everything I could, then became a shipwright and a professional sailor onboard Swan’s then Fife’s, Maxi’s and J-Class, crossing back and forwards across the Atlantic (meaning an eternal summer) then a Pacific crossing down to live in the the ozone-free capital of the world; Australia.

Anything sound familiar here? A youth spend outdoors with little or no sunblock – maybe wearing a cap, (never one with a broad brim – that was for old guys…) plus back then I knew mates with tanning sun-lamps that were as sophisticated as a toaster – which come to think of it did exactly the same job.

So I got burned. A lot. Sitting on a surfboard staring out to the horizon waiting for the next set, or on the rail of a yacht keeping an eye on the opposition, I got burned. When I did apply sunblock on a race boat it was as we were heading out to the start line – a rushed procedure, sharing a tube of liquid perfumed Factor 8 with other crew, which was probably past its use by date and certainly didn’t stay on long, offering me little protection. And so what was happening? Well basically we have three primary layers of skin and the Epidermis, “Epi” coming from the Greek meaning “over” or “upon” is the outermost layer. This forms the waterproof, protective wrap over the body’s surface, and is made up of stratified squamous epithelium with an underlying basal lamina.

Skin is amazing stuff. Our largest organ, it exudes antibacterial substances that prevent infection, and keeps out pathogens, whilst insulating us and regulating our temperature. It makes Vitamin D and is a highly sensitive barrier to the outside world. It is self-repairing, (replacing itself generally every twenty seven days), is stretchy and a perfect fit – in fact it is so remarkable that we take it for granted, often forgetting how hard it works in a range of temperatures and just how susceptible it is to damage – particularly from burns, and that is what sunburn is, radiation damage, which makes it through the Epidermis, and when that happens you burn and blister.

This damage is recognised by the body, which triggers various defence mechanisms. These include DNA repair to deal with the initial damage and the apoptosis – from the Greek “falling off…” which is the strategic cell death by rapid blistering, (an indication of a second-degree burn) and the peeling of the skin to quickly remove irreparably damaged skin cells. There is also increased melanin production to prevent future damage, and when repeated burning occurs that is when the trouble starts. Another key point is that even when you remove yourself from that environment and move indoors into shade – the burn continues, affecting your skin for 24 hours or more.

So to put it mildly, there is a lot going on. What you can do minimise this trauma when out on the water is to cover your skin. Australians and New Zealander’s have been hammered with the “Slip, Slop, Slap” message for decades – which translates to, “slip on a shirt, slop on some sun screen and slap on a hat.” This has been a highly successful public health campaign – but as always, the fine details are the key. If you are going to cover skin, long-sleeved is good, and sailing rash-vests now commonplace and comfortable. Sunscreen; everyone knows it comes in various SPF factors, but what does that mean?  Sun Protection Factor is a measure of the amount of sunburn producing UV rays that reach the skin. For example if your skin normally begins to burn after 30 minutes in full sun without any protection, and you plan to use a sunscreen with a SPF of 15, multiplying 30 X 15 would technically provide you with 450 minutes of protection. I say technically, as this is assuming sunscreen is applied (and re-applied every two hours) evenly at a thick dosage of 2 milligrams per square centimetre – and that it stays there.

Perspiration, spray, waves on the foredeck and swimming during capsizes impact how long suncream can stay on; and if its not on – its not working. For those of you in the northern hemisphere just coming into spring, particular care is needed. People are looking to get out into the sunshine after a long cold winter, but when pale skin meets clear skies – even on a cool day, you can burn quickly. Hospitals in the UK report there are more cases of sunburn at Easter than in July.

Ultraviolet radiation causes sunburn and increases the risk of three types of skin cancer, melanoma, basal cell carcinomas and squamous cell carcinoma, and it is important to understand what these are and how they can rapidly affect you.

Melanomas can grow quickly. They can become life-threatening in as little as six weeks and if untreated can spread to other parts of the body, appearing on skin not normally exposed to the sun. A melanoma is usually flat with an uneven smudgy outline and may be blotchy and more than one colour – brown, black, blue, red or grey. A nodular melanoma is highly dangerous form of melanoma that looks different from common melanomas – they are raised from the start and have an even colouring (often red or pink or brown or black). This type of melanoma grows very quickly and needs to be treated as soon as possible.

The basal cell carcinomas (BCC) are the most common and least dangerous forms of skin cancer. These can be lumpy or scaly in character, and is red or pale and are slow growing, often occurring on the ears, face, nose and neck.

The squamous cell carcinoma  (SCC) is not as dangerous as a melanoma but can spread to other parts of the body if not treated. SCC’s often appear on the body where it is exposed to the sun, such as the hands, arms, and head. BCC’s & SCC’s are referred to as non-melanoma skin cancers and are much more commonly diagnosed that a melanoma. A serious concern is that the melanoma risk is dose-dependent, and so increases with the number of that person’s lifetime cumulative episodes of sunburn. It has been estimated that over a third of melanomas in the United States and Australia could be prevented with regular sunscreen use.

I sat down to write this to help with the awareness and understanding on what happens to considerable exposure to sun damage. One of the key messages to me from a Queensland doctor is NOT to have annual skin checks, but to be skin aware, and to visit my doctor whenever I have a concern. It’s important to understand what is happing with any changing moles, lumps or freckles on your skin, particularly in places that you can’t see, which is where a partner can assist. If these occur quickly, waiting for an annual check up may be fatal.

The other thing that occurs for me is that when I develop a BCC or an SCC, it becomes itchy, and I often don’t notice that I am beginning to rub or scratch that area on my shoulders, my back, or above the hairline on the back of my neck. So my advice is be skin aware, do some research on skin cancer and think about how you can minimise your risk. Two sailors I admire here are Tom Addis and Stan Honey, who both wear broad brimmed hats whenever they are on or near a boat. One thing I have noticed though is the broad brimmed hats that marine clothing manufacturers make are often too floppy in any breeze, and so I customised mine by sewing a band of stiff sailcloth on the underside of the front of the brim, using a small piece of the J2 from Ken Read’s VO70 Puma as it was getting repaired during the Auckland stopover – thanks Kenny…

I also understand broad brims are not convenient on a high performance dinghy, and so when racing my A-Class, I apply plenty of thick sunscreen, and having tried dozens of brands the Harken Derm 50 sunscreen is what I use – and I can see that it stays on all day, particularly on my ears and face. The other point I would advise is to find a good dermatologist. I have spoken with several sailors who are unhappy with the cursory skin checks their dermatologist gave them, and if that happens to you – find another one you are happy seeing and who takes an interest in your concerns. You are in control here; get the knowledge, protect yourself and your family and keep an eye on your skin. And finally, if you have been exposed to a lot of sunshine, prepare yourself for the phone call.

Americas Cup – Auckland NZL – Day 2 – One and One again