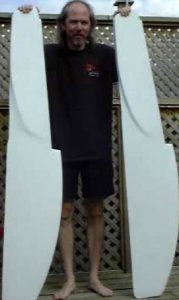 Tune the Way Back Machine to the fall of 2002… I had just taken a layoff package during the Hi Tech meltdown, and  decided on a complete change of course. Funds were spent on a CNC milling machine, and I stuffed it into the basement and declared myself in the business of making foils.  Naive, I thought I would be a craftsman eking out a living from dinghy blades. My shapes were great, thanks to technology. My paint finishes – not so much. But the prices were right and customers started coming. “Phil’s Foils” was launched, for better or worse.  Soon enough the occasional small keelboat rudder was added to the mix, then bigger and bigger projects came along.

The Ed was good enough to run this story on the Front Page in 2003 – and more customers came.  In turn, I started advertising on SA. More than anything, this business has been about relationships: customers, suppliers, service providers.  Barney Harris (Albacore, 505) gave me a load calculating spreadsheet I use to this day. Bruce Marek trusted me with the short run of Cape Fear 38 rudders, and later posted in my defense when someone got pissy on BoatDesign.net.

One day Ian Farrier even dropped by to check me out – by then I was doing quite a business with the Farrier homebuilders – and had a laugh at the small shop I was working out of (which to me it was a big step up from the basement!).   I’ve mourned customers that have passed away, I’ve lost clients to bankruptcy, I’ve been threatened with law suits, and I’ve been rewarded with notes of gratitude. I’ve learned to take my lumps when I’ve screwed up, but I also hold firm when I’m right and to hell with the consequences.

17 years later, that basement operation has moved 4 times, has incorporated, and is now 20,000 sq ft.    We are now on the web as cci.one, but philsfoils.com will still get you there: the sailboat rudder market remains a huge part of what we do.  Investments are still being made in technology – a 3D Scanner , so we can know exactly the shape of your old rudder before drawing the replacement;  a new 5-Axis  CNC machine (16’ x 6.5’) for big one-off projects and tooling.   It’s still a thrill the first time working with a name Designer or Rock Star client, because at heart I’m really a fan.  Having a relationship established with Farr for building their updated rudder designs… just WOW.

Somehow over the years I drifted away from advertising in Sailing Anarchy, but never really left.  Placing an ad again feels like coming home. Thanks Scot!