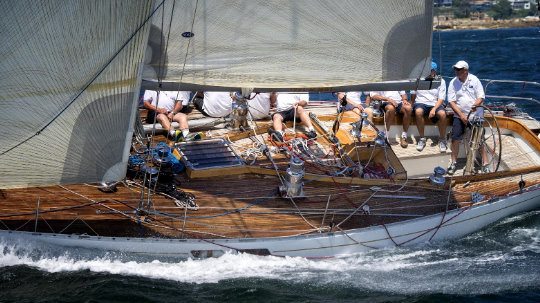 A 45-year-old wooden yacht with a good chance of winning this year’s Sydney-Hobart race? You gotta be kidding. Not if that yacht is Love & War, the classic S&S sloop that has already won on handicap in 1974, 1978 and 2006. In fact, given the right conditions, this remarkable ocean racer could win a mantelpiece full of trophies when the 638nm race concludes in late December.

To mark the 75th anniversary of the event the Cruising Yacht Club of Australia has added an IRC “Grand Veterans” division for yachts launched prior to 1976. Love & War will be hard to beat in that group, and is still competitive in IRC and PHS whenever a race includes plenty of tough upwind sailing. Add to that the opportunity to also win the “Corinthian” (non-professional crew) IRC and PHS divisions.

The yacht has only had two owners: Peter Kurts, who had her built in 1973, and his son Simon. Peter later campaigned a string of more modern IOR yachts – Drake’s Prayer, Once More Dear Friends and Madeline’s Daughter – but Love & War remained his favourite and he kept the old warhorse until passing her on to Simon.

The towering masthead rig and more than 14 tons of displacement give the yacht real presence. With all guns blazing she digs a mighty hole in the water, an effect that’s heightened by the tumblehome in her hull sections that was a Sparkman & Stephen trademark in the early days of IOR.

Yet despite all that power – the deck gear is massive – Peter Kurts regularly cruised Love & War from Sydney to Lord Howe Island single handed – a remarkable 850nm round trip in the Tasman Sea for a small man in his mid-70s.

Simon Kurts has maintained the family tradition, keeping the 47-footer ‘race ready’ and in immaculate condition. There’s little doubt that anyone with a fondness for classic ocean racers will be cheering her on when the fleets turns South for Hobart on Boxing Day.

go to the show