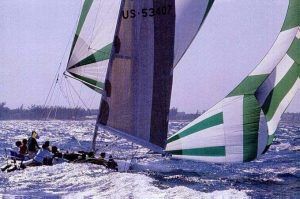 So here is a question for you. Does the ubiquitous Code 0 and the blooper have anything in common? What kind of question is that you ask? Well stick around and I will explain. First let’s get to the blooper, we all remember those don’t we? Many thought that the blooper was invented by sailmakers to sell more sails and in a way it was. My former boss, a sailmaker by the name of Chris Bouzaid, many years ago when he was a cocky Kiwi sailing all over the world, came up with the idea. Chris and his crew were preparing for the Southern Cross Cup raced every two years off Sydney, Australia.

They were in Auckland training with some fellow Kiwis when the wind suddenly went light and they thought to set their “drifter” which was not attached to the headstay but was instead set free flying. The wind came aft and they decided to set a spinnaker. As they were taking the drifter down they eased the tack and the sheet to do so and to their amazement the sail just sat they pulling nicely. Best of all the speed went up.

Chris contacted the rules guru’s who after much deliberation could not find anything that prohibited the sail from being legal. It was a headsail after all and measured as such. The following weekend before heading to Sydney, Chris and his crew went out and tested a larger version which by now they were calling a shooter. He built one for each of the Kiwi boats racing in Sydney and the next week they showed up for the regatta. The rest, as they say, is history. Despite a total uproar when they revealed their “little secret” and a huge effort to get the team disqualified, in the end the rules committee found that the sail was legal. The New Zealand team of Pathfinder, Runaway and Waianiwa finished the race in first, second and third on corrected time and they won the Southern Cross Cup by the largest margin on points, a record that has never been equaled or beaten.

Somewhere along the way the shooter was renamed the blooper and became very popular on all classes of boats. In 1981 I was racing aboard the American entry Scaramouche in the Sardinia Cup in Italy as foredeck rat and was introduced to another very cocky Kiwi by the name of Chris Dickson who was to skipper the boat. Dickson’s Dad Roy was the navigator on Chris Bouzaid’s boat and it was Bouzaid who recruited Dickson to helm Scaramouche. I think that I am right in saying this that Scaramouche was the only “old” boat in the regatta, but with Dickson’s brilliance we finished second overall against an international fleet of over 50 boats.

Fast forward 12 years and Chris Dickson is on board his Whitbread 60 Tokio about to start the 1993/94 Whitbread Round the World Race. It’s the day before the race start and he unveiled his own “little secret.” It was a spinnaker that had a sacrificial piece of netting running the length of the leech. When the sail was sheeted on the netting just curled up allowing Dickson to use the sail pretty much as a headsail. The Whitbread 60’s were a new class created for the race that year and the rules stated that the boats were allowed to carry up to two mainsails, seven jibs – including a heavy-weather jib – and eight spinnakers. Chris had done an end run around the rules. His sail had a girth of 75% meaning that it should have measured as a spinnaker even though it was going to be used as a headsail. In the end the rules council won the day deeming the sail to be a headsail which would have given Tokio an advantage in certain sailing conditions, and therefore they deemed the sail to be illegal and it was left on the dock.

While Chris might have been prevented from using his “secret weapon” in the Whitbread he had inadvertently started a new revolution in sailmaking. He had invented the Code 0 which we now see on almost all boats out there, both racing and cruising. Originally Code 0’s were designed to qualify as spinnakers under various rating rules which require the mid-girth to be 75% of the foot length, but their use and design has evolved over time and along with these changes so too have the rating rules. The sail is still set free of the headstay, in other words flying free like a spinnaker, but they can be used to sail very close to the wind, not unlike a headsail. Where they are especially useful is on boats where the rules do not allow overlapping headsails. Ie: a Whitbread 60…:)

So back to my original question. What do bloopers and Code 0’s have in common? They both came about as a way to circumvent rules. The Blooper was really just a spinnaker masquerading as a headsail while the Code 0 was a headsail masquerading as a spinnaker. The good news is that bloopers are gone. The good news is that the Code 0 was invented. All good I say. – Brian Hancock.