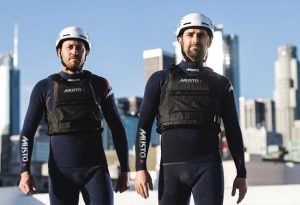 The garment requirements for the next America’s Cup have more in common with motocross body armor than traditional yachting apparel.

It says a lot about how much the America’s Cup has changed in the past decade that Musto will be supplying the Stars & Stripes team with gear not from its yachting apparel, but from its dinghy range of technical clothing. Musto is the exclusive official technical sailing apparel sponsor of Stars & Stripes, challenger for the 36th America’s Cup presented by Prada, and Musto’s design team can’t wait to get stuck in.

The jump-off point begins with the work lead designer Shane Rhone and his team did with Franck Cammas and Groupama Team France for the 2017 Cup in Bermuda. ‘That was a very interesting and challenging project which sets us up well for the work we’ll be doing with Stars & Stripes this time round,’ Rhone says.