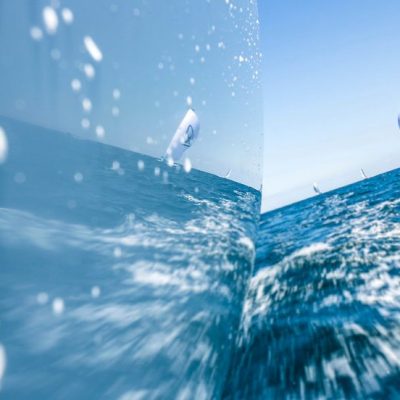 On Day 1 the TP52s got in two races, with the Phoenix 11 and 12 crews placing 5th and 6th above Quantum Racing, before light wind conditions called off racing on Day 2. By Day 3 Quantum Racing was back at the top, and only one race could get on Day 4, with Quantum Racing winning. Entering the 5th and final day of racing, Quantum Racing, Provezza (Turkey), and Platoon (Germany) hold the podium spots, but Azzurra (Italy) is close behind. Phoenix 12 is in 7th and Phoenix 11, 9th. By the final day and regatta results Platoon finished first overall, Provezza second, and Quantum Racing third.

All that, and the regatta’s sustainability program is what caught my attention. I was walking by the TP52 fleet dock on the eve of the Menorca 52 SUPER SERIES when I saw a man frantically pushing cables into a switchboard inside a small booth. He resembled an old-fashioned telephone switchboard operator, maybe one frantically trying to locate the queen. The man was Christoph Kröger, Sustainability Officer for the 52 SUPER SERIES. Having no manners, I ignored how hurriedly his hands were moving and asked when the regatta started.

Kröger was trying to get the water maker, comprised of the entire small booth, working in time for the next day’s practice race.

“Of course,” I said, then proceeded to further break his concentration by apologizing for interrupting him. He apologized, hands still jumping around the switchboard, and I managed to say something polite.

“No, no” he said, and came out of the booth. I could hear his German accent now. “This is the water maker.” He gave me the schedule and I stepped away, but minutes later he found me again and told me, at length and with passion, all these things I had no idea could go on to make a regatta sustainable.

The 52 SUPER SERIES is the world’s leading grand-prix monohull racing circuit. They partnered with Bluewater, the maker of the sustainable water booth because a water filling station is not enough when potable water supplies face different issues around the world. Bluewater really made an impact (or rather, successfully did not) in Cape Town during the 2017-18 Volvo Ocean Race, when the water was safe to drink, but severe and long-lasting drought meant events could not draw water from the town water supply. The 52 Super Series now emulates this no-impact solution across its circuit.

Tina Plattner is the series’ only female helmsman, racing Phoenix 12 while her father, Hasso Plattner, helms Phoenix 11. Plattner lives in Germany, but the boats represent the Republic of South Africa. (The crew is international: I overhead an American team member asking which way was up as he placed the South African flag decal on the boom. A South African team member told him “The sea cannot be red; red is up.”) The younger Plattner funded a Seabin for the circuit. The Seabin unit is a trash skimmer designed to be installed in the water of marinas, yacht clubs, and ports. The unit acts as a floating garbage bin skimming the surface of the water by pumping water into the device. It intercepts floating debris, macro and microplastics, and fibers. The Seabin is also able to clean the water from contaminated organic material.

The series uses sustainable cleaning products, too. Less glamorous, sure, but the 52 SUPER SERIES has partnered with Ecoworks Marine to use their “Preserve the Living Seas” range of eco-friendly and MARPOL (MARine POLlution) compliant boat cleaning products.

The 52 SUPER SERIES takes a day before each race week to clean a local beach. In Menorca, they teamed with Menorca Preservation Fund and Beachclean Menorca to tackle microplastics washing up on Menorcan shores. (Watch the video here.)

A new area that the 52 SUPER SERIES is tackling is food waste: with more than 400 individuals on site at each week of racing, and a total of five regattas, circuit leaders feel there is an opportunity for measurable positive impact. Teams are being encouraged to use local food suppliers who only buy locally-sourced products, and adhere to basic eco-friendly principles, such as using only re-usable containers or packaging.

“We have a few teams who are already well ahead of the game in these regards, and we learn from them as well, but – as with single-use plastics, which are now forbidden – we want to make this way of thinking totally universal throughout the entire 52 SUPER SERIES family,” said Kröger.

I spoke to one of Phoenix’s chase boat drivers, Siyanda Vato, from Durban but now a resident of Cape Town, about the many efforts that go into a regatta.

“Normally there are only 15-20 minutes between races,” said Vato. “So we want to get them sails to change as quickly as possible, so their head is in the right space for the next race.”

Having originally planned a structured media interview, I talked to Kröger by luck, and to Vato, out of a good fortune, too. I’d assumed he was on a TP52 only to learn he was part of the bigger team, and that, second to the racing, is what draws me to these events. It takes a village. – Heather Richie.

Did Ya Get It?

put a cork in it

a different kind of kite