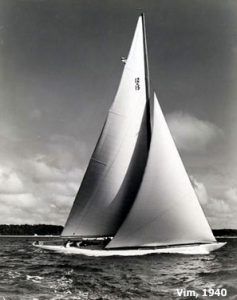 May 11, 2019 (Fairfield, CT) — Richard Matthews, a noted world class sailor who served as navigator for two significant America’s Cup crews, died on Saturday in Fairfield, CT. He was 88.

Mr. Matthews served as navigator on America’s Cup challenger Vim in 1958, and in the same role with Weatherly in 1962. His brother Don Matthews was on both crews as well. Vim was runner up in the challenger trials to the eventual winner Columbia, and Weatherly won the Cup over Gretel.

“In those days, most of the world’s best sailors cut their teeth on Long Island Sound,” Matthews once said. “We met Bus (Emil) Mosbacher (who skippered both Vim and Weatherly) racing dinghies out of Larchmont Yacht Club and were lucky enough to stay with him through both Cup campaigns in ’58 and ’62.”