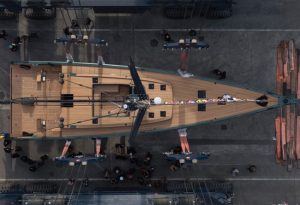 When the builders at Vismara were approached to use their well-honed skills in crafting a beautiful new luxury performance yacht designed by Axel De Beaufort/Guillame Verdier, they needed to be assured their suppliers to the project met their own high standards. They chose UBI Maior as the supplier for most components of the deck hardware and sail-handling systems.

The vision for this new 69-footer called Nacira 69 was one not yet attempted in this genre: take the best elements of the Imoca 60 class yachts and adapt them for shorthanded luxury racing and cruising. Built in pre-preg carbon with a deck-stepped mast placed well aft towards the longitudinal centre of the yacht, Nacira has a more open interior for cruising along with the very latest in offshore performance design from the creators of many Imoca 60s as well as larger ocean greyhounds such as Comanche. Read on.

get used to it