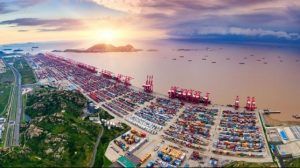 On Sunday, U.S. President Donald Trump accused China of backtracking on its previous agreements in trade talks, and he threatened to raise existing tariffs on $200 billion worth of Chinese exports by an additional 15 percentage points by the end of the week.

Trump said that the move was a response to a Chinese attempt to renegotiate terms in ongoing trade talks. On Monday, U.S. trade representative Robert Lighthizer confirmed that the talks have not been proceeding in the direction that American officials desire. He indicated that Chinese negotiators had sought to materially alter the terms of a written agreement as the talks neared completion. “Over the course of the last week or so we have seen an erosion in commitments by China. That in our view is unacceptable,” Lighthizer said. “Come Friday there will be [more] tariffs in place.” Read on.

Death on the Water

the bottom fell off