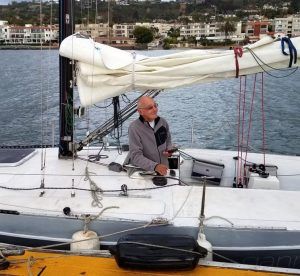 At dawn on Monday, April 29, GANNET, my ultralight Moore 24, and I ghosted past Point Loma and entered San Diego Bay completing my sixth circumnavigation and her first and one of the most difficult and frustrating passages of the entire voyage.

I started my first circumnavigation in San Diego in 1974 and I am pleased with the symmetry of completing my last here forty-four years later.

The voyage took almost five years, but could have been done in three. I spent an extra year in New Zealand because of a severed left shoulder rotator cuff and because I like New Zealand, and I spent last year on the East Coast after my wife and I bought a condo on South Carolina’s Hilton Head Island.

The final passage from Balboa, Panama to San Diego was brutal without any severe weather. It was more prison of the sea than monastery. We never had more than 25 knots of wind and perhaps not more than 20. We had little rain.

I knew that there would be light wind for the first part of the passage and that we would be beating to windward for the last 800 or 1000 miles, but the windless hole for most of the first 1500 miles was beyond my experience or even imagination, and we were hard on the wind for probably the last 1500 miles, not 800.

There were times when if I could have ended the passage I would have, but I couldn’t, so I carried on. In an absence of joy, there is much to be said for honor and perseverance. And once completed there is the satisfaction of having gone the distance and accomplished something difficult.

The photo of GANNET and me at the CBP dock at Shelter Island was taken by Lee Johnson.  – Webb Chiles.