pie in the face 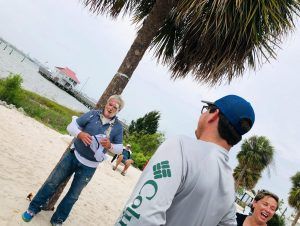 Charleston Ocean Racing Association (CORA) members could not turn down an off-water competition at Charleston Race Week when Travis Cook, the son of the late skipper Jay Cook was challenged to throw a pie in the face of rival captain Eddie Evans on behalf of a CORA member fundraising for a sailing charity. Cook passed away before he could participate in CRW 2019, but beforehand he and Evans were inseparable competitors and the best of friends at local and regional big boat regattas.

With his family in attendance, a new tradition was born. The sailors raised over $500 in one hour just to see Evans, who is known for winning regattas and dressing as Captain America, take a cool pie to the face. Evans girlfriend even donated to the cause! If you can beat ‘em, still join ‘em, seemed to be Evans gracious attitude.

During Charleston Race Week Evans raced his Beneteau Oceanis 381 in Pursuit Class, placing 7th, along with friend Mark Stetler who raced his Ericson 38 and placed 3rd. That’s important because Stetler donated generously to see a pie make contact with Evan’s face, and 2020 is going to need a pie-in-the-face challenger. Stetler seems poised for the spot.

2020 will mark CRW’s 25th anniversary along with the City of Charleston’s 350th and the 250th of the College of Charleston, whose J/22s were sailed by Warrior Sailing this year. Warrior Sailing 1, skippered by Sammy Hodges, lead the fleet and won five races, even skipping the last. His crew included warrior sailors Navy veteran Ruben Munoz and Army veteran Troy Rassmussen.

Charleston Race Week, an arm of CORA, has come to embody tradition and community, working as a nonprofit itself while supporting other sailing organizations as world-class sailing. Hodges, for one, was mentored under Hanckle among other members of Charleston’s sailing community.

Willy Schwenzfeier, one of the original members of CORA, has competed in all 24 Race Weeks.

“I remember the very first year there was this new sport-boat called a Melges 24 and it raced in PHRF and the skipper had to put a bow pulpit on it,” Schwenzfeier said with a laugh.

Fast forward to 2019 and CRW welcomed the M32 class for its first year. The high-performance catamarans zipped around the other class circles in a natural exhibition. The fleet previewed the course in 2018.

“We had eight teams here and they all had a fantastic time. We’re looking forward to coming back next year,” said Dave Doucet, Director of M32 North America. “We wanted to sail in close proximity of Patriots Point the first couple days to give the spectators a show. We sailed off Fort Sumter today and had a big breeze with flat water, which these boats love. Charleston is a great location and it was really fun to race here.”