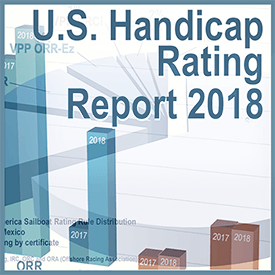 Ratings based on velocity prediction programs are gaining advocates across North America. Here are the numbers.

The total number of boats with rating certificates derived from measurements and a velocity prediction program is on the rise in North America. As our end-of-year survey proved, the market is moving, and the team at the Offshore Racing Association (ORA) is encouraging that move.

Note that for the purposes of this survey, we have included the single-number rating rule, IRC, which is not a VPP-based rule but in many areas competes for market share with current VPP-based rules. Note also that the ORA owns and manages three VPP-based rules—Offshore Racing Rule (ORR), ORR-Ez, and ORR-Mh (multihull).

Reviewing the published 2018 data from the groups managing the IRC, ORCi, and ORC Club, as well as the ORR and ORR-Ez, shows that 1,543 certificates were issued to boats in North America last year. This is an increase of about 400 compared to 2017, a 35-percent lift, and is the result of growth in three of the five rules surveyed.

Gimp On A Moth