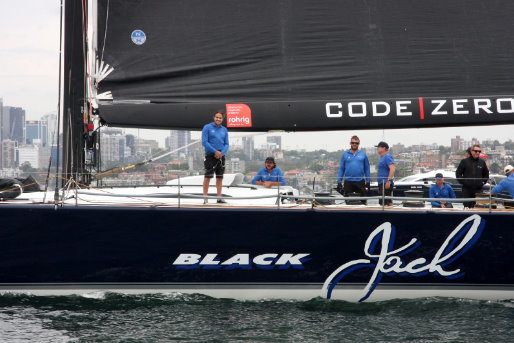 We all know that old joke about the farmer and his favourite axe: it’s had three new handles and two new heads, but he reckons “it’s still as good as new”.

Well, consider the photo above, taken of the veteran 100-footer Black Jack before the start of the last Sydney-Hobart race. If word on the waterfront is right, that section of hull is just about all that will be left of the old Reichel-Pugh after the radical mods being planned for its bow and stern.

It’s not as if this 14-year-old supermaxi is slow. Originally built for Neville “Croaky” Crichton in 2005 and campaigned as Alfa Romeo, she beat Wild Oats XI for line honours in the 2009 Hobart race before being sold and raced in the Northern Hemisphere as Europa.

Meanwhile, in late 2015, WOXI – a virtually identical Reichel-Pugh – underwent extensive plastic surgery. In an attempt to match the off-wind speed of Comanche and reduce the supermaxi’s nose-diving, six feet was lopped off the stern and nearly 40 feet removed ahead of the mast. A complete new – and longer – bow section was then fitted. In effect, this moved the mast aft to the middle of the boat.

But controversy remains about another feature of those Wild Oats renovations. The bowsprit was grafted into a newly curved stem profile, much like a traditional clipper bow. Many commentators at the time believed this broke a number of rules, including those that govern maximum LOA for the Hobart race, the limits of the “working deck” area and the requirement that a spar such as a bowsprit should be detachable.

With far less radical modifications, Black Jack then proved herself to still be competitive at the front of the fleet. She was always ‘there or thereabouts’, matching Wild Oats in most conditions and sometimes sailing slightly quicker in light-to-moderate air. She was leading the 2018 Sydney-Hobart and might well have won but for some unlucky holes and shifts rounding Tasman Island on the final day.

But it seems there are now major changes underway for Black Jack. Perhaps ironically, it is the bowsprit that may have given us the first hint. While the yacht and crew were in Queensland trying to break their own elapsed time record for the Brisbane to Gladstone race, a specialist carbon fabrication shop in Sydney was commissioned to make Black Jack a new bowsprit.

Why would she need that? Well, news has leaked that McConaghy’s, the boat builders who made both Alfa Romeo and WOXI, are constructing not just a whole new for’d section for Black Jack, but a broadened aft section as well. It seems that owner Peter Harburg wants to have the combined advantages a wider stern, and a mast position that puts the boat’s centre of effort in the most efficient place. Only the middle section of the hull – and the deck layout – is likely to survive.

Those mods will cost millions. Is there no end to the determination of some millionaires who can’t be happy until they’ve won Sydney-Hobart line honours? And the added spice to this unfolding saga is that Harburg was the owner who first raised the issue of Wild Oats XI not transmitting from its AIS during the 2018 race. He didn’t protest, but there’s little doubt the manner of that loss still rankles with him.

As the old proverb goes, “revenge is a meal best served cold”.