editorApril 17, 2019
Wee asked you anarchists to send in a story/photo that you won or were stoked about and Anarchist Len sent this one in. Send in yours! 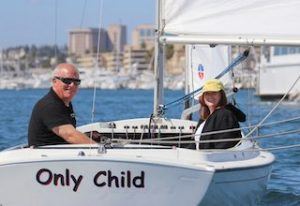 I’ve done ok in some offshore events by winning the overall and divisions over the years yet what has still escaped me was a goal I set years ago in one-design close course racing in Newport Beach. The goal was to finish in the top half of the Gold/A Fleet during championship regatta. For example, if the division had fifteen boats in it I wanted to finish seventh or better. In the early 2000’s the Lido 14 fleet regained popularity and I finished 8th in two class championships. It started to feel that was about as high as my skill level would take me and I had some type of jinx that kept me from sailing my best in Championship Regattas or I was just trying too hard.

While I entered my fifties my belly grew larger and my pants were pulled up higher and I had to leave the small dingy fleets and move into the Harbor ‘20s. This turned out to my advantage because the Harbor 20 fleet was the only game in town for short course one-design sailing in our harbor. Over the last ten years, the fleet championships would come by each season and there I was in 8th place again and again. Never making it over that hump of finishing in the top half of the fleet.

Then about four years ago the wife took a stronger interest in sailing with me, to be honest I feel she was getting tired of seeing photos of me with other women taking home the few pickle dishes I had won. Whatever it was it has been the best thing for our marriage once we started sailing together and becoming a strong team in sorts.

Last season I won my first high point event in the Harbor 20 class in A fleet but I had sailed with a college all-American. It did not feel the same, I wanted the win with my true team-mate. As the Harbor 20 Class Championships approached my wife said: “ Why don’t you sail with the kid, you will have a much better chance at winning.” My reply was “That’s not how I want to win.” Yes, I made some hay with that reply!

The class championships arrived and my approach, while sailing with my wife, was to qualify for gold fleet first then just let it flow and be at one with the harbor. Just let it happen try not to over think my efforts and yes, have a good time by laughing off the bad finishes. Well, it worked we finished 5th out of 15 boats in gold fleet. To say I was stoked is an understatement, it felt really fucking good! In fact, the wife still reminds me of the finish, it’s probably one of the few positive memories she will recall when we are poking jabs at each other.

bernard’s at the door