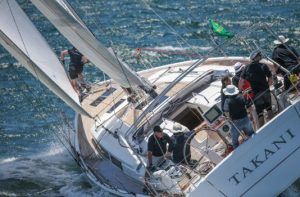 We all learn from our mistakes, but – regrettably – that doesn’t seem to stop us from making new ones.

Offshore buffs will remember the kerfuffle over the ‘protest that never was’ after last year’s Sydney-Hobart Race. The AIS (Automatic Identification System) on line-honours winner Wild Oats XI mysteriously stopped functioning just before the start. The published Sailing Instructions for the race were unequivocal:

Special Regulation 4.09(a): An AIS Transponder shall be carried and be switched on, such that it is receiving and transmitting.

Nevertheless, a Race Committee protest against WOXI wasn’t even considered. The jury never investigated because the protest had come in response to “a report from an interested party” (another competitor) – a threshold technicality.

But the issue didn’t die there. AIS is an important safety system for any craft operating offshore, especially at night. It is now a world maritime standard, and mandatory for entrants in most of the major blue water events.

The Notice of Race for the 2019 Sydney-Hobart was released yesterday by the Cruising Yacht Club of Australia and those of us with an interest in these matters wasted no time checking the comms sections, and the AIS rule in particular.

What did they find? Well, the Special Regulation 4.09(a) as quoted above is still there. But an extra sentence has been added:

“The failure of any station to receive a signal from a boat’s AIS Transponder shall not be subject to protest or grounds for redress (amends RRS 60.1 and 62.1(a) and RRS 63.1 shall not apply).”

WHAAAT??? How else can anyone be sure a competitor’s AIS is switched on if not by receiving its signal?

The rule now seems to be saying that every yacht must have an operational AIS, but if nobody can receive its transmit signal then that’s perfectly OK. So what is the point of having an AIS requirement at all?

Admittedly, there have been occasional reports of reception issues with AIS but that hardly justifies disallowing any protest in cases where there’s a reasonable suspicion that a boat may have switched off their AIS transmit function for tactical reasons.

Unless I’m misreading this provision of the new Sydney-Hobart NoR, it looks awfully like the rule you have when you’re not having a rule.

There is no “us” in US Sailing