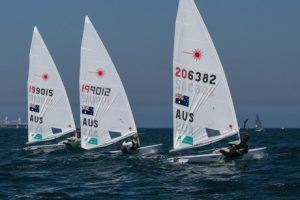 LaserPerformance has posted a communiqué yesterday  alleging that not only did ILCA tolerate infringements to the Laser Construction Manual by Performance Sailcraft Australia, but also agreed for some infringement to become part of the new construction methods by the 3 builders. The mast rake was also allegedly adjusted to the sailor’s demands! According to LaserPerformance, this made “all previous Lasers technically obsolete” and “no notification of the breach in protocol was reported to ISAF/WS or the Laser community at large.”

This clearly provides a taste of what is to come in the expected legal / trademark battle between ILCA and LaserPerformance, the world’s dominant Laser builder, recently decertified by ILCA.

no paris for you

but it’s a cold heat