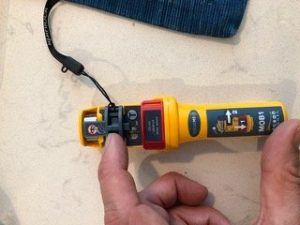 I was testing the ability of my Spinlock Deck Vest to hold air.

I unzipped and manually inflated (because I didn’t want to waste a C02 cartridge). During inflation I saw the antenna of my MOB1 pop up (and thought shit what a dumba$$) as I forgot to about its automatic deployment with inflation.   As I quickly went to disarm it I realized it never activated.

Normally when the grey plastic tab is pulled away, two small magnets on the backside of the tab are also pulled away and the device switches on. (internal magnetic switch I presume)

One of the small magnets that is glued to the backside of the grey plastic tab remained attached to the MOB1 so when the plastic tab was pulled away the device did not activate.

This sees like an incredibly rare events as the sweeping motion of the plastic tab should have dislodged the magnets anyway.  Perhaps because I inflated manually and it happened very slowly…….

I am posting this to remind people with this device to be aware of how to manually activate it (the tiny red button); which is seen once the grey plastic tab pulls away.  This also should trigger a DSC alarm, which unless you have gone to the added steps of programming in an MMSI number won’t happen.  Only an AIS MOB alarm happens automatically.

The device is approximately 3 years old.   The test function is perfectly normal.  It has never been immersed. This MOB I installed myself (not a factory installed one from Spinlock); although I don’t think this would play any roll in the malfunction as the plastic tab was pulled away with inflation as it is designed. Jump in the thread..

four ring circus Stephen Colberts upcoming Charleston to Bermuda Race effort continues to bring sailing headlines to the mainstream, this week announcing that Audi of America would be sponsoring his chartered Farr 65 for the race.