This always struck us as a weird attempt anyway…. 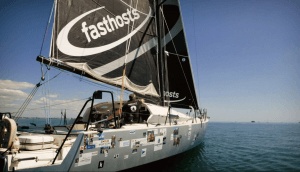 Unfortunately it is Game Over for Alex Alley’s Record Attempt. He was over half way, having sailed nearly 14,000 nm solo since 31 January…Here is a message from Alex as of about an hour ago:

Most of you will have noticed that a few days ago I took a more northerly course than may be expected and I have been going a bit slower ever since. We have been trying to deal with an issue onboard – where the mainsail attaches to the mast. There is a track that runs up the length of the mast, and ‘cars’ run up the track which attach to ‘batten boxes’ on the mainsail…., a few days ago it was almost impossible to get the main down to reef it – i had to winch it down with such force that i was expecting either the sail to rip in half or the track to pull off the mast or the line to break. eventually, inch by inch the sail came down. i since noticed damage to several cars and some of the track. i have tried swapping things around but i still get the same jamming issue.

This means that I can no longer hoist the mainsail all the way up without it jamming – the bigger issue with this is getting it back down again, which is very important when the wind increases (especially for the expanse of Southern Ocean between New Zealand and Cape Horn) and I need to reduce sail by reefing and lowering the sail again. I am currently in 3rd reef, which means that in light winds I am very slow (like now in 7kts wind!).
I have been trying various solutions but with no success as the track itself is damaged with a nick out of it, and possibly more further up, and three cars are also damaged with bent pins. I have come to the very disheartening conclusion that the only option is to head for a port and try and sort it out – but this means giving up on the Record. I simply can’t carry on with 3 reefs all the way and still be viable against the Record.

live from the east