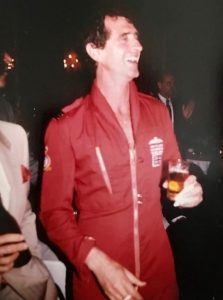 John Thackray passed away on March 5, 2019, after a long battle with cancer, surrounded by close friends and his nephew from England. He was 73 years old.  John grew up sailing in the English Channel and the North Sea area where he quickly developed a passion for the sea and the finer points of racing a sailboat. During his racing career, he raced onboard Kioloa, Running Tide and Charisma, all famous race boats. His racing resume is extensive with several transatlantic crossings, trans Pacific crossings, many Bermuda races and major regattas around the world. He was a superb trimmer but he often managed the boat as the chief boat maintenance worker.

In the 1997-98 Whitbread – Volvo Ocean Race around the world, he was assistant shore manger on Chessie Racing, the entry from the Chesapeake Bay and the first American boat finisher in the race.

While sailing Leg 5 from Auckland NZ to Sao Sabastiao, Brazil, through the treacherous South Ocean, Chessie Racing broke its’ donkey engine which was needed to shift water ballast and make fresh water. JT as he is known by the sailing community, scrounged the many parts needed in Annapolis, charts and other equipment in great need, flew to Chile, took a long cab ride to Ushuaia and meet Chessie Racing off shore so it could successfully complete the leg placing 3rd. The extraordinary efforts of JT are remembered fondly by the racing team to this day.

In recent years, JT served as captain on Grand Slam, a 75 ft Feadship and several smaller competitive fishing boats. JT is a member of the Storm Trysail Club and the Royal Ocean Racing Club and for many years was a member of the Annapolis Yacht Club. Fittingly his ashes will be distributed in his favorite seas off Miami, the Chesapeake Bay near Annapolis and The Channel. A remembrance will be held in Annapolis at a future date.

The Force Is Strong

Getting Their Feet Wet