come one, come all 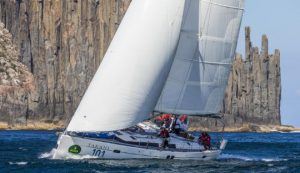 There was considerable relief in the local offshore community yesterday when a senior Cruising Yacht Club of Australia figure scotched the rumour that the club would be limiting entries to the 75th Sydney-Hobart Race. This quelled persistent fears that a fleet in excess of 150 entrants might not be found adequate temporary berthing when they arrived in Hobart, and that the club would be struggling to process the mountain of compliance paperwork now required for each yacht and their crew.

The CYCA is not expecting the fleet this December to match their all-time record of 371 starters for the 50th anniversary race in 1994, but numbers will be significantly above the average of around 85 contestants during the past decade. For the first race in 1945 just 9 yachts started on the 630nm sprint South. Fastest time back then was 6 days and 14 hours. Today, the supermaxis cover the same distance in 1 day and 9 hours.

Remarkably, three of the yachts in the inaugural race 75 years ago are still in sailing trim and are expected to take part in a special two-day Veterans Regatta that will kick off a month of anniversary celebrations planned by the CYCA. The event will be open to any pre-1975 yacht that has competed in a Sydney-Hobart race. The organisers have already identified more than 70 classic yachts that would qualify.

For the race itself, media attention will concentrate on the ‘Battle of the Behemoths’ – the line-honours contest between the handful of 100-foot supermaxis that now compete against each other nowhere else in the world. Rio has signaled their intention to journey Down Under again to resume their scrap with Scallywag, Wild Oats XI, InfoTrack and Comanche.

There will – inevitably – be yet another controversy involving Wild Oats XI (it wouldn’t be the Hobart without one), but at least we can be certain that this year they’ll keep their AIS switched on all the way.

King of the River