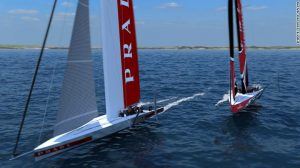 Science, secrecy and subterfuge have become as much a part of the America’s Cup scene as the sailing itself.

Two years out from the 2021 America’s Cup in New Zealand’s Auckland, this covert phase of design and testing is in full swing, with teams working feverishly to dream up a speed machine capable of winning the “Auld Mug.”
The boats for the next edition of sport’s oldest international trophy will be radical 75 feet long foiling monohulls — dubbed AC75s — which means they will lift out of the water on canting hydrofoils to “fly” at speeds of up to 50 knots.
The concept is cutting-edge, and a departure even from the high-tech foiling catamarans that made up the last two editions of the Cup. More here.
editorFebruary 26, 2019
Leave a reply

beat on the brat