There is lots of negativity around the demise of trailer sailing. 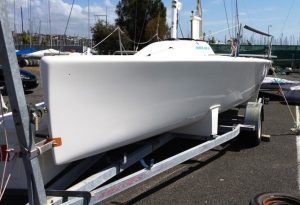 Personally I feel that the joys and advantages are just not promoted strongly enough to those hoards of caravan owning masses both grey nomads ( semi and actual retirees ) and families with kids.
I have posts going on other forums forums extolling the virtues of free water front camp sites on quiet rivers and bays instead of fighting for the last remaining sites in a relocated inner city low rise subdivision other wise know as a fully infested caravan (Trailer) parks.

There is a country song about “getting to know your neighbors much more than you might care too” which I feel is often applicable to these parks. You also know the best spots are usually nailed down by the families that have been going to the same campground for years.

I read lots of negatives in sailing forums about the failings of certain yachts that are more closely targeted at “on water camping” rather than sailing fast or ocean passages but these are the type of yachts that may save trailer sailing. Sailing as a sport is generally moving to hi tech yachts and may shortly be upgraded again to foiling boats and the like which can never be converted to camper sailing or occasional extended cruising use. The other alternative seems to be huge cruising catamarans and monos that often rarely leave their again apartment block equivalent living marinas as they act as almost fixed floating holiday homes.  Jump in the thread for more.

be my ac valentine