battle of the aussies 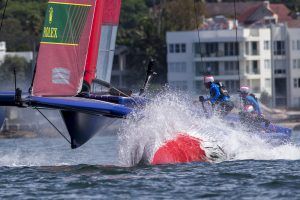 So SailGP Sydney is over and the two Aussie skippers handed it out to everyone else. Difficult after one venue in one set of conditions to say whether they are a step above the rest or not. Time will tell in a non-home venue in different conditions and of course when others gain more practice.

I note multiple comments on our forums, some good, some bad but as sailors what we need to realise is this isn’t really for us, it is for the lands people who don’t know one end of a tiller extension from another. They are the ones being targeted for the oohs and aahs, them and the eventual sponsors who would hope that their logos on the sails and their association with something so modern and ‘out there’ – in their eyes at least.

As a sailor was it riveting? Not as much as I hoped but for a 50knot capable boat to reach anything like those speeds Mother Nature has to cooperate and for racing to be close she has to do it equally across a race course and over the past few days the typical Sydney Summer Breeze just didn’t cooperate.

Like all short course racing the starts were vital as evidenced by Phil Robertson’s efforts. When China Team got it right (twice) they posted two second slots, when they got buried it was last (almost) all the way in the other three races. I know I was paying attention to that team but just check my screen name.

Another thing I noticed was the variation in speed out of the tack especially in these borderline conditions. I am no hydrodynamicist but just like an aircraft adjusts their flaps for take off and landing compared to level flight I imagine the lift Vs drag of the F50 foils and what is the right angle at the right time is something that takes some learning and Boys from Beijing did see overly slow at times. Maybe I was just watching them more but that was my perception.

Overall a thoroughly convincing display of how to get these things round the race track quickly by Tom Slingsby and his crew having suckered everybody into a false sense of security in Race 1 of the event.

So 5 races then top 2 match race? I really don’t think that worked for a number of reasons. First one being that as an old fashioned geezer I don’t think cats – no matter how fast they are – are the right weapon for match racing. There was virtually no pre-start interaction other than a little wobble, perhaps a missed hook opportunity then whoosh with the only interesting bit a “oh no you don’t luff” approaching the zone at the first mark.

That led to two boats on a race course that already had looked relatively empty at times with six boats on it and interest waned.

Finally sending 4 of 6 boats home for the last race denied visibility of the teams fans and when the planned sponsors are recruited less exposure for those attached to teams that don’t make the final although I suppose that is always a risk for sponsors.

However it is what is was.

Slingby took out the win with Outridge second followed by GBR, CHN, FRA & USA in that order and well deserved too.

I would save my final comments to those about the commentators. As a Brit I am used to Soccer being covered with comments from the likes of Gary Lineker, one of England’s top goal scorers ever (number 3 if I remember correctly) or Alan Hansen called by some ‘The English Beckenbaur’ (even though he was Scottish). (NFL fans will probably have to wiki them) Swimming had Sharon Davies, former GBR Olympic Swimmer and athletics former 1500, World Record holder Steve Cram yet in the wide, wide world of articulate, top world class sailors we got a rugby commentator.

Reid, Montgomery, Lester – were they all unavailable?

Anyway, early days and all my comments are not meant to be disparaging but rather what either I or some of our worthwhile forum posters feel would improve a new sailing series that, certainly in this writer’s opinion, has the real makings of something that can have a real exciting future in our sport.

It has taken some time for that original idea that Russell Coutts had with Paul Cayard many years ago and it has certainly changed almost out of all recognition in the interim. If SailGP can expand to the hoped for 10 teams with even more venues around the world it is likely to provide yet one more pinnacle for the stars of our sport to shine.

One has to admire Russell’s vision along with his long time sailing partner, Larry Ellison for not only having the vision but putting in the effort, and yes, the cash to get this series off the ground.

Not perfect but it doesn’t take 20/20 vision to see the potential going forward, either short or long term. Photo thanks to Andrea Francolini

you can’t make this shit up