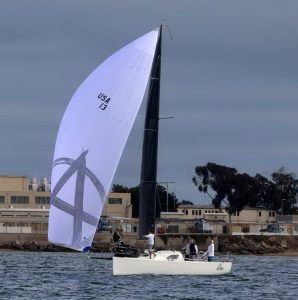 Last weekend there was a promise of the Flying Tiger 10 “fleet” racing in the south bay for two days – the best racing area in all of Dago, but only three boats signed up, one of which could sail one day, so there was no race. A4 could only do one day as well.

This weekend is the SCYA Midwinter regatta out of SWYC  for PHRF boats, only one day, Saturday. Would you care to venture how many total PHRF boats are registered? How does four total (now six! – ed) sound?  And A4 is one of them. With three days before the regatta, only four god damn boats are signed up.

I have suggested that perhaps with even a few more entries, we can all race together in one class, and do it inside the bay, as it is projected to blow 16-18 and given SWYC’s often poor R/C work in the ocean, the bay would be a much easier venue.

Come on people, sign up and let’s have a fun day on the breezy bay!