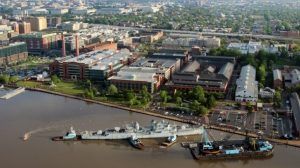 While Congress and the White House debate funding for a $5.7 billion wall along the southern border, the U.S. Navy is contemplating a similar structure with a different purpose: a 14-foot high seawall to protect the Navy Yard in Washington, D.C. from climate change.

According to the Union of Concerned Scientists, water levels in the D.C. area will rise much more quickly than the global average. Thanks to rising seas and natural subsidence, water levels along the Anacostia River will rise by four to six feet by 2100.

This would be enough to expose parts of the Navy’s oldest installation to frequent flooding, and storm surge could lead to more serious damage. According to a 2018 assessment by the U.S. Army Corps of Engineers, a 10-year storm could create flood levels of seven feet at the Navy Yard.

To combat this risk, the Navy is contemplating a $20 million, 1.5 mile-long, 14-foot-tall seawall to protect three dozen buildings from floodwaters. This would address everyday flooding and provide enough capacity to hold back storm surge during extreme weather events. The proposed wall would extend along the site’s waterfront and wrap around along shore to the west, separating the yard from adjoining neighborhoods.

Water level rise of 4-6 feet would also inundate about half of Naval Support Facility Anacostia, which is located just downriver. Low-lying NSF Anacostia already experiences about 40 flooding events per year, of varying intensity; by mid-century, that number could rise to 450-600 per year, under a worst-case scenario.

The flooding would potentially affect some of the Navy’s most important facilities. The Navy Yard is home to the Chief of Naval Operations; the Navy’s engineering and procurement division, Naval Sea Systems Command; its reactor-engineering department; its facilities engineering division; Military Sealift Command; and the Judge Advocate General’s Corps. NSF Anacostia is home to the Commander of Naval Installations, the DoD Inspector General, and the Marine Corps helicopters that transport the President of the United States.  Courtesy Marex.