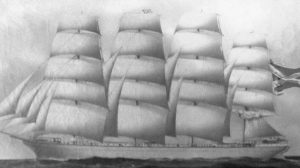 Save Falls of Clyde-International has launched a gofundme fundraiser in an a last ditch effort to stop the disposal of the 140-year-old tall ship Falls of Clyde, currently based in Hawaii.

The 285-foot long and 40-foot wide vessel built by shipbuilders Russell & Co. in 1878 entered service as part of the Falls Line fleet, all of which were named after Scottish waterfalls, and she sailed to ports on all continents except Antarctica.

The group is refusing to give up and firmly believes that the historic vessel can and will still be saved from destruction. The fundraiser will finance the Insurance Bonds that the Honolulu DOT Harbors Department has assigned to her auction which was announced last week. The group would like to bring the vessel back to the U.K to be restored and put back to sea to offer education at sea, fairtrade/carbon free cargo delivery, sail adventure holidays and to play a part in clearing the ocean of ghost nets.

If she is saved, she will become a hi-tech example of what U.K shipbuilders can achieve, being rebuilt to the latest Lloyd’s Register standards, fitted with hydrogen engines, solar sails, wind and battery power along with high efficiency solar panels and the latest safety and navigation systems.

Strathclyde University is engaged in redesigning her power and propulsion systems, with much work already completed. A naval architect, Ron DeVos from Amsterdam, has begun her interior redesign. A lift ship has already been offered along with a dry dock and quayside location. A large number of skilled volunteers have offered to help in her restoration.

The gofundme page is here.

race to the future?