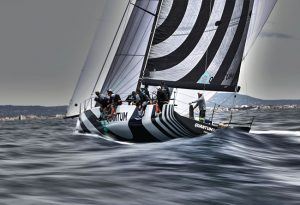 Ever since Ingo Buell’s routing system helped Jochen Schümann plot his route to Olympic victory in his Soling at the 1996 Games in Atlanta, Buell Software has been developing tactical technology to help sailors win

As its name implies, SailTokyo is a system aimed at those looking to win gold at the next Olympics in Enoshima less than two years from now. Among its clients Buell Software can count the Olympic sailing teams of Belgium, Germany, Switzerland (and some larger sailing nations who prefer to keep their anonymity) along with the host nation of Japan, whose sailors surely know the venue better than anyone. Yet SailTokyo’s application is much broader than Olympic sailing or the next Olympic venue. Read on.

so there’s the magic!