it’s not a sprint, it’s a marathon 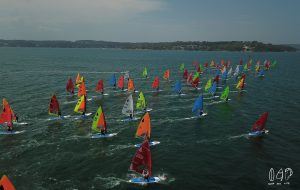 Just back from the 42nd Windsurfer Class Australian Championships at Toronto on Lake Macquarie, NSW (1.5 hours north of Sydney).

Raced on the recently released Windsurfer ‘LT’ – a modern update to the original Windsurfer that hundreds of thousands learnt to sailboard on – the package features a lightweight epoxy hull with enhanced volume driven by a simple but highly tuneable rig.
It delivers good performance whilst supporting inexpensive one design racing, where the emphasis is on skill and tactics rather than equipment.

The fleet was red hot with Olympians and World Champions mixing it with up-and- comers from RSX/Techno as well as some pretty handy weekend warriors. Men’s fleet is divided evenly into 4 weight groups to account for one rig size for all.

No upwind pumping keeps the older crew in it and makes the racing much more even and strategic.

A ‘Cruiser’ division allows returning and novice racers a great option to get on the racetrack with shorter courses.

In 9 months more than 300 LT’s have been sold in Australia and over 1,000 worldwide – with big fleets already in Europe and Asia. The USA is just firing up.

The Class received World Sailing recognition in November (after a 20 year gap) and will host its first official Worlds on Lake Garda late July. More than 200 competitors expected.

In a great move to drive junior participation the Australian Class Association and local distributor announced annual Scholarships to the top performed female and male Youths at the Nationals providing funding for them to attend the Worlds. The years recipients were Hamish Swain and Isabella Grimshaw.

All in all a ripping event and a massive boost for the sport that is finding its way back to its longboard roots after years of eating itself chasing high performance, high wind, and high cost options..

Heaps of photos, drone and video at the Class Facebook page https://www.facebook.com/windsurferclassaus

show us your jimmy

if it ain’t broke