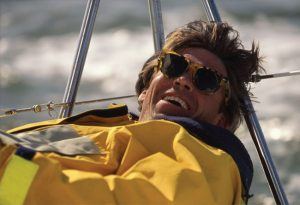 Here’s a sneak preview of the just-released documentary film about Vendée Globe competitor (and one time Seahorse contributor) Mike Plant. It’s an amazing, probably unrivalled glimpse into the psyche of a solo sailing icon

Mike Plant was one of the most remarkable and fascinating figures ever to compete in solo ocean sailing, widely admired for his prodigious talent, superhuman toughness and single-minded determination. He burst onto the scene out of nowhere in the mid-1980s, built his own Open 50 on a shoestring and won his class in the first race he entered, the 1986- 87 BOC Challenge.

In a career that spanned just five years before he was lost at sea while sailing his radical new Open 60 Coyote to the start of the second Vendée Globe, Plant achieved more – against all odds, sailing around the world three times by the seat of his pants – than most professional sailors do in a lifetime. Read on.