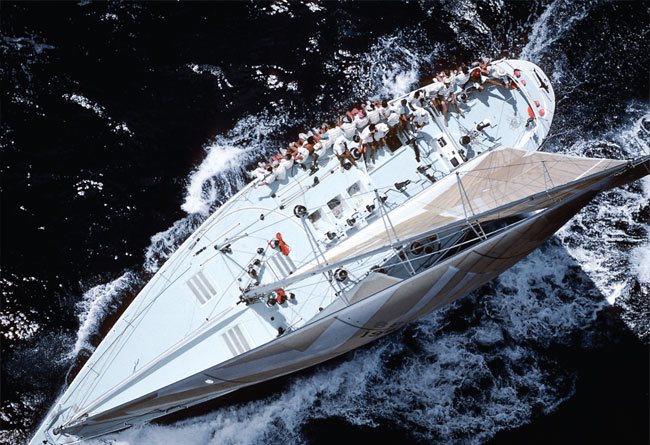 Broadly speaking there seems to be a general decline in the numbers taking part in competitive sailing, with just a few exceptions. There are of course multiple reasons playing into this and it is true of many other sports in this day and age. In the UK cricket, golf and rowing are all in decline – only cycling is growing. Perhaps the noncompetitive culture in junior schools is having an effect but it seems more likely that the competitive bar has been raised so high that unless you are in an Olympic medal-targeted elite you fall out of any sport quite early.

There are now more Maxi yachts in the world than ever before. Most new builds, however, are multi-purpose yachts and not pure racers. Relatively few are competing or if competing they do so in just a few events per year. Clearly there is a change in focus.

Maxi owners rely on professional help. At the top end – for example, the Maxi72 racers – it is not uncommon that the only amateur/Corinthian sailor onboard is the owner-driver; usually with an Olympic and/or America’s Cup tactician giving him clear, detailed instructions. The owner-driver aspect is very important. Just ‘keeping the cheque book dry’ and sitting on the rail loses its appeal fairly rapidly, and sadly many affluent and successful men have left the sport after such treatment.

Buying a Maxi is expensive, running one even more so. At Maxi level having professionals rather than your friends onboard might be unavoidable because of the size and complexity of the boats. But when the competitive drive leaves no room for friends it must be a disincentive to many, which takes us back to the problem at junior level. A very high-achieving elite group driving out the ‘less keen’ competition who feel they will never have a chance – and do not want to get into an arms race in both crew and equipment.

Main picture: The greatest-looking but sadly not the fastest IOR Maxi of all, Windward Passage II was designed by German Frers for Australian Rod Muir and was the first proper all-carbon Maxi when launched in 1988 – soon to quickly outclass all of her aluminium-built rivals. However, like the rest of the Maxi fleet of the time, Passage could not compete with Bill Koch’s monster heavy-displacement Matador2 when she appeared in 1990 – Matador2 did for the IOR Maxis what Franck Cammas’s Orma Groupama 2 would do for her class 10 years later. Note the beautifully fabricated slender alloy spar and minimalist spreaders

The sheer number of crew on these large yachts who then have to be housed, fed and watered at expensive venues can be daunting. As nowadays most large yachts have powered systems and are designed to be sailed with fewer crew the extra bodies are mainly ballast on the rail… often expensive ballast at that. We are addressing this as an experiment this year at the Maxi Yacht Rolex Cup (MYRC) giving a rating bonus for yachts using less than 66 per cent of the maximum crew number recorded on their IRC certificates.

Beyond that we need to look at getting boats to sail like with like. Traditionally Maxi class divides have been based mainly on hull length (LH). Hence the divisions Mini Maxi 60-80ft, Maxi 80-100ft and Supermaxi 100ft+. Sub-divisions into racer and racer-cruiser work really only in bigger events such as the MYRC itself.

Modern designs can have very different performance characteristics and a racer Mini Maxi will easily outpace some of the older Supermaxis. Ideally we would separate on performance into racer, racer-cruiser and cruiser-racer and we have done this successfully with the Mini Maxis at the MYRC for the past two years.

But making the definition absolute and clear is difficult and carries the real risk that designers will ‘game’ the system. They will always try to produce the ‘wolf in sheep’s clothing’ – the racer posing as a cruiser.

Our commitment to encouraging the genuine cruiser-racers is evident from our appointment of a new IMA vice-president to represent the older and ‘Spirit of Tradition’ yachts. Marietta Grafin Strasoldo, the owner of the well-campaigned Swan 65 Lunz am Meer, has kindly accepted this role.

Three years ago we created a new series for Maxis, the IMA Mediterranean Maxi Offshore Challenge, with a best three out of five of the well-known offshore races in the Med. In a further initiative to encourage Maxi racing we are now launching its inshore equivalent, the IMA Mediterranean Maxi Inshore Challenge. Again this will encompass a number of events, of which the best three will count – starting from PalmaVela, there are Rolex Capri Sailing Week, the inshore series at the Rolex Giraglia (St Tropez), Copa del Rey, Maxi Yacht Rolex Cup and Les Voiles de St Tropez.

Another new challenge for the IMA this year is to encourage and support the newly formed International Schooner Association. This is to provide specific events for classic Maxi schooners. Their sailing characteristics are of course very different from other classic yachts, so the aim is to devise events where they can race separately and on courses specifically designed for them. A first event is planned in May this year – the Capri Classica – with at least six but maybe more of these magnificent vessels expected.

Finally, it was wonderful to see one of the largest new Maxis stretching her legs in the joint RORC/IMA Transatlantic Race. Pier Luigi Loro Piana’s beautiful Reichel/Pugh-designed Baltic 130 My Song had an almost perfect trip across and his first comment at the end was that Grenada came up far too soon. They were having such fun that they wanted the race to be longer: ‘our voyage was really too short’ (10 days). Against their early expectations, as their imperative was not to break anything before the Caribbean cruising season, they lowered the course record – albeit by just 1h 19m.

My Song has only been sailing seriously for a year. Mainly she has done the major Med inshore events, the MYRC, Les Voiles de Saint Tropez and of course the Loro Piana regatta also in Porto Cervo which the owner sponsors. The IMA and RORC were delighted that they had decided to enter our Transatlantic and are even more delighted that she did so well. My Song is a glowing demonstration that modern Maxis can do so much more than compete inshore. Click Click here for more info.

the trend is not their friend

no day at the beach