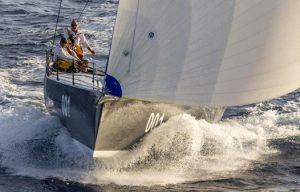 Matt Allen’s team on his Botin 52 Ichi Ban may have been unlucky not to repeat their 2017 handicap win in the recent Sydney-Hobart race but they more than made up for that disappointment in the just-concluded Australian Yachting Championships sailed on Port Phillip Bay, Melbourne.

In ORCi Division 1 Ichi Ban lived up to its name (“Number One’ in Japanese) by scoring an astonishing eight strait bullets in the eight-race series. Even more astonishing, that extraordinary feat was matched in ORCi Division II by Khaleesi, the DK46 owned by Andrew Dalley, who also finished first in all eight races.

Hang on, that can’t be right. Let’s check the results on the regatta website. Yep. There they are: eight first places for both yachts. With one drop that gave them a perfect series score of 7 points for the national championship.

So how did the other boats go? Er, well, there were no other boats in ORCi. Behold the old “one boat shall constitute a race” rule in all its silly glory.

To be fair, things weren’t much better in IRC which had just four entrants in Division 1, another four in Division 2 and just three in Division 3. So only two boats in the whole event missed out on a podium finish. Nice work if you can get it! (And the organisers now have four unawarded trophies left over for next year.)

the tribe of ben