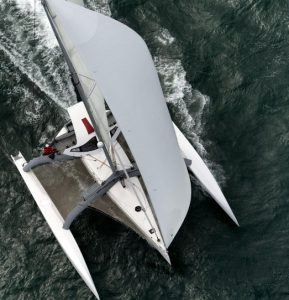 By Chris Museler
With Clint Clemens, conceiver of the Bañuls 53 Trimaran FINN

It’s hard to top a sunny fall day sailing a Dyer Dhow with your boppy seven-year-old granddaughter. But Clint Clemens is never satisfied with an exceptional experience. He’s always looking to have more fun, and take his friends along for the ride.

Clint had a beer, loaded young Emmy, her best friend and me into his truck, and raced the sunset to Third Beach. We piled a grocery cart-load of food into a floppy inflatable and zipped out to his custom Trimaran, FINN, as 25 knots blew a mist of light, stinging sand from the dunes across our legs.

The air temperature was sliding down into the low 40s when we tucked under the arching, crimson-striped “power blister” and went below. Phew! A complete pressure cooker pasta meal, some rum, juice and bedtime stories under the LED lights illuminating a carbon-clad band around the cabin ended our day. Knowing Clint, the next day was going to be at least as great, if not better. We were asleep before our heads hit the pillow.

FINN is what you get when a young, wild entrepreneurial artist discovers the ultimate freedom of wind, speed and fun with an original Windsurfer in 1978, and has 40 years to perfect this sensation.

A hugely successful advertising photographer with an appetite for fast cars and heart thumping experiences, Clint has spent his adult life razor focused on two things: his career and having as much fun and adventure with his family and friends as physically possible. How FINN was conceived, built and sailed between Maine and the Caribbean for the past four years is as much a dissertation on the dominant virtues of multihulls, particularly trimarans, as it is about one person’s search for a perfect play platform. And if there’s anyone who deserves this multihull soapbox, it’s Clint.

Just to give a little street cred, it’s important to note that Clint split the costs of tooling for the original Gunboats. Two 62’s were built in South Africa at Harvey Yachts: Tribe, for Peter Johnstone, and Safari, for Mr. Clemens. Now the archetype for luxury performance cruising, the Gunboat kinda kicked multihull cruising into high gear. But as Clint worked his way from Cape Town to Newport on Safari in 2001, hammering around in gales and 9-meter seas, he didn’t care about trend setting, he just wanted the most rad craft he could conjure up to explore the Caribbean and New England, loaded with windsurf, kiteboarding and diving kit. Today, FINN is leading the next trend in multihull cruising.

A creative genius and slave to detail, Clint took 13 trips to McConaghy Boats in Hong Kong during FINN’s construction. On the port side tiller there’s a white cue ball knob pilfered off a Hurst four-speed shifter (with a black one on the starboard tiller as a bookend). The red in the racing stripe is a deep red that has, “some balls, and not cherry.” This boat is sick. Here’s Clint’s thinking on multihulls and how FINN was born.

the lady in red